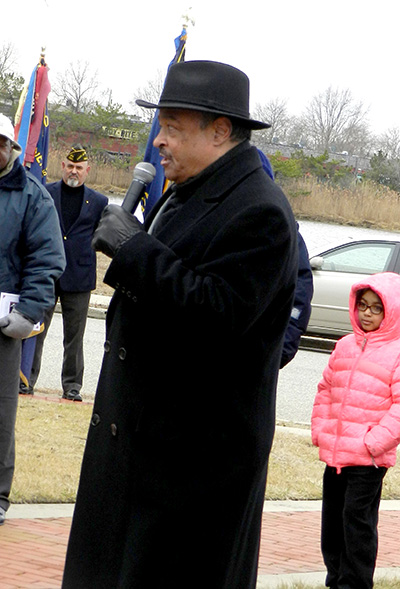 Rev. Aaron Gibson tells of the timeless messages we can get from Martin Luther King Jr.’s speeches.

On Monday, at the culmination of the Martin Luther King Jr. Guild of Long Branch’s week of ceremony’s in memory of King’s life and works, Gibson said that he liked to watch tapes of King’s speech, which inspired him as they had others.
Gibson, addressing the crowd at Martin Luther King Memorial Park on Atlantic Ave., said he always knew he wanted to be a minister one day. “Growing up in the 1960s, Dr. King had to be one of the greatest role models” for an aspiring preacher, he said.

Today, when he listens to King’s words, “I’m impressed to the point of being able to say that speech could have been given today.”
Gibson pointed to a few of the speeches, and the lessons to be learned from them.
King’s 1968 sermon on the “drum major instinct” said that people might want to be out in the front – like a drummer in a marching band – but that’s not the most important thing.

“It’s not the person who has the power, but the person who is helping to save other people,” Gibson said.
King’s classic 1963 “I have a dream” speech resonated with Gibson, because it talked about living in a nation where his children would not be judged by the color of their skin.

“I never really had a non-black friend until I went into the Army in 1969,” Gibson recalled.
In a 1956 speech, King called for boycotting companies that discriminated against black workers, or refused to hire them. Those included some major products used by many Americans, including Coca Cola and Wonder Bread. Gibson said that King was telling people to sacrifice their comfort for the greater good.

One of his most moving speeches was his last one, on April 3, 1968, the day before he was assassinated, when he talked about how he had been to the mountain top.
“It was not about civil rights, as much as civil rights is important,” Gibson said. “It was a speech about his relationship with God.”

Before Gibson addressed the crowd, Mayor Adam Schneider said that Long Branch was the sort of community that tried to live up to King’s ideals. The day before, he had taken part in a ceremonial march and church services in King’s memory.

“When I go on the Sunday of Martin Luther King’s weekend… it is uplifting, it is spiritual, it is emotional, and it is one of the most moving three hours you can imagine,” he said.

Long Branch is a diverse community, made up of many ethnicities who work together, Schneider said.
Gibson concluded his speech with similar remarks, noting that Long Branch was a multicultural, pluralistic society.
“When this life is over, all of us will go to a place that looks like Long Branch,” Gibson said.

Jacob Jones, a member of the city’s Martin Luther King Guild, with fellow members, prepare to lay a wreath on a monument to King.

Members of the Long Branch VFW form a Color Guard for the MLK Day ceremonies.

Rev. Aaron Gibson tells of the timeless messages we can get from Martin Luther King Jr.’s speeches.