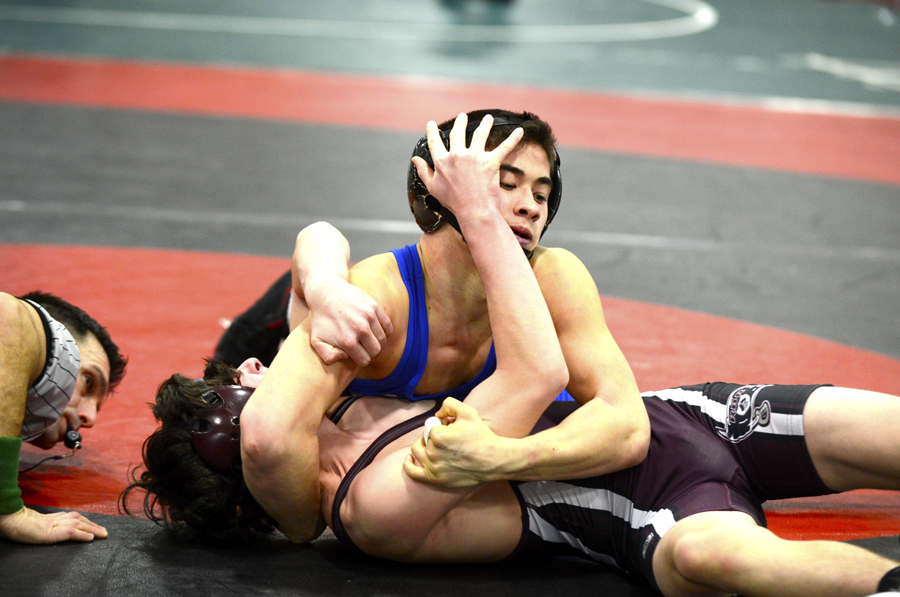 After the quarterfinals CBA has a slight lead, 108 points over defending team champions Long Branch High School which has 102.5 points. Both programs advanced 11 wrestlers into the semifinals, which will be held on Saturday, February 22, 2014 at Red Bank Regional High School.

CBA has not won a District Team Championship since Lyndon B. Johnson was President of the United States, back in 1968. And that was the only team in the history of the Colt wrestling program to come away with that title.

Ocean Township High School following the quarterfinals on Friday night is in fifth place in the team standings. They are missing Zack Hertling, who pound-for-pound is one of the best all-around wrestlers in the state making it to Atlantic City as a freshman and sophomore. But this year, as a junior he suffered a torn ACL and is out of action.

However the Spartans did have five wrestlers making it to the semifinals on Saturday. Max Rallo 120 pounds and Andrew MacNeille 132 pounds had two of the fastest pins on Friday night. Teammates David Tieto at 106, TJ Saldutti at 152 and Dan Loizos at 220 pounds all moved on to the semifinals.

Red Bank Catholic is currently in eighth position in team points. They have two wrestlers going to the semifinals. Thomas Meer at 138 pounds had an overtime 4-2 win Mike Chadwick of Raritan. And Shawn McCord at 220 pounds didn’t work up much of a sweet as he scored a pin in 18 seconds for RBC over Billy Groesbeck of CBA.

Long Branch as defending District 22 Champions had 11 wrestlers out of the 14 contested weight division’s advance to the semifinals. TJ Conlon won his quarterfinal match 13-3 at 106 pounds over Alex Erven from Keyport/Henry Hudson. At 113 pounds Jason Hernandez of Long Branch scored a pin with 1:35 left in the third period and he was winning 10-2 at the time over Gerell Cox of Ocean Township.

At 120 pounds Andy Hernandez of Long Branch scored a pin at 2:45 over Alessandro Lombardo of Red Bank Catholic.

Ocean and Long Branch meet again at 126 pounds, Thomas Flannigan of Long Branch scored a 6-4 win over Constantin Poniros of Ocean to advance to the semifinals. Long Branch suffered a loss at 132 pounds when Aaron Torres lost by pin to Marcus Lwama of Rumson-Fair Haven.

The Green Wave had a scare at 145 pounds. Nicholas Menkin who is famous for his takedowns this season was disqualified during the NJSIAA State Team competition for an excessive body slam. His signature move is to pick up his opponents using his superior strength and bringing them to the mat. Sometimes he gets a little over zealous.

Menkin was wrestling Carter Marquette of Ocean Township High School and was winning 9-3 with about 1:20 to go in the third period when he did his signature move. Marquette hit the mat hard with his head. An injury timeout was called and the official was telling LB head coach Dan George that it was an excessive slam. For a minute everyone thought that Menkin was going to be disqualified again. However, Marquette who was visibly shaken got up and wanted to continue. The two wrestlers shook hands and continued and Menkin won the match 9-4. He is not vindictive in his move or malicious; he is just an aggressive wrestler. As he moves on into the Regions he will have to curtail his technique.

Brandon Perez of Long Branch won his quarterfinal match 12-7 over Garrett Fitzgerald of CBA at 152 pounds. At 160 pounds Arturo Rios scored a technical fall victory of 17-2 over Isiah Sestito of Red Bank Regional.

Caseys and Green Wave faced off again at 195 pounds when TJ Covin of Long Branch scored a pin with 1:17 left in the third period and he was winning 12-1 at the time over Max VonSuskil of RBC.

Two weight classes left for Long Branch, 220 pounds where Joey Jasio lost 3-1 to Connor Spreen of Middletown South. In the 285 pound match John Tomlinson with 1.6 seconds left in the third period and winning 4-0 over Carlton Spence of Middletown North scored a pin.

We will have full coverage and photos of District 22 in The Link News on Thursday, February 27, 2014.
Also check our Facebook page for sports photos: www.facebook.com/thelinksports
And follow us on Twitter, @TheLinkNews 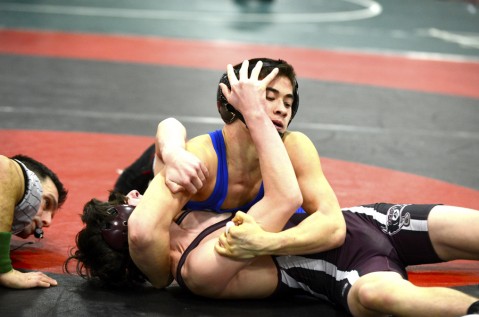