Former Hudson County, N.J., Teacher Sentenced To More Than 10 Years In Prison For Distributing Images Of Child Sexual Abuse Over The Internet 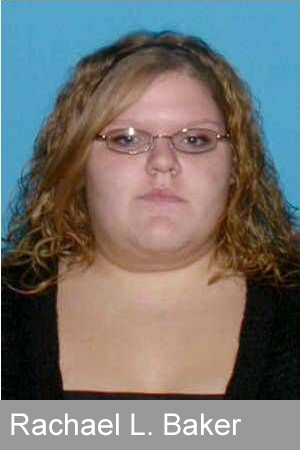 TRENTON – Acting Attorney General John J. Hoffman announced on February 28, that a Camden County woman was sentenced to prison today for having sexual intercourse with a 13-year-old boy and photographing him and an 8-year-old girl engaged in a sexual act.

Rachael L. Baker, 23, of Winslow Township, was sentenced to 10 years in state prison, including 8 ½ years of parole ineligibility, by Superior Court Judge Michael J. Kassel in Camden County. Baker pleaded guilty on Sept. 11, 2012 to first-degree aggravated sexual assault, admitting that she engaged in sexual acts with the 13-year-old boy on three occasions.

Baker also pleaded guilty to a second count of first-degree aggravated sexual assault and counts of conspiracy and child endangerment, both in the second degree. She admitted in connection with those charges that she directed an 8-year-old girl to perform oral sex on the 13-year-old boy and took a photo of the act with her cell phone which she sent to a co-defendant, Gary T. Cramer, 29, of Bridgeton. Cramer, who Baker believed was her boyfriend, allegedly directed her to photograph the children in the sexual act. Cramer was indicted with Baker on June 28, 2011 and faces pending first- and second-degree charges.

Deputy Attorney General Denise Grugan handled the sentencing for the Division of Criminal Justice Financial & Computer Crimes Bureau. The charges are the result of an investigation by the New Jersey State Police and the Division of Criminal Justice. Deputy Attorney General Kenneth Sharpe, who is Deputy Bureau Chief, indicted the case and took the guilty plea from Baker.

“This woman’s conduct in sexually exploiting young children was completely depraved and callous,” said Acting Attorney General Hoffman. “We’re making it a top priority to uncover these sexual predators and put them behind bars, where they can’t harm vulnerable children.”

“The National Center for Missing and Exploited Children has reported an alarming growth in online activity involving the sexual abuse and exploitation of children,” said Director Elie Honig of the Division of Criminal Justice. “We will continue to use cutting-edge technology to apprehend sexual predators who share evidence of their crimes through the Internet and cellular telephones.”

The investigation also resulted in charges against a second woman, Stephanie Bennett, 27, of Woodbine, who was indicted separately on June 27, 2011. The investigation revealed that she made a video using her cell phone of herself performing oral sex on an infant boy. She pleaded guilty to a fourth-degree charge of child abuse and neglect and was sentenced on Dec. 6, 2013 to time served. She served approximately two years in jail prior to sentencing.

As part of the investigation, the State Police executed search warrants on Feb. 16, 2011 for Cramer’s home, his vehicle and Bennett’s home. Detectives seized three computers from Cramer’s home. During the search of his vehicle, detectives seized a laptop computer and cell phone belonging to Cramer, as well as a cell phone that had belonged to Bennett. They were taken to the Regional Computer Forensic Laboratory at the Hamilton (Mercer County) Technology Center for examination.

If you suspect improper contact by unknown persons communicating with children via the Internet or possible exploitation or sexual abuse of children please contact the New Jersey Internet Crimes Against Children Task Force Tipline at 1-888-648-6007.