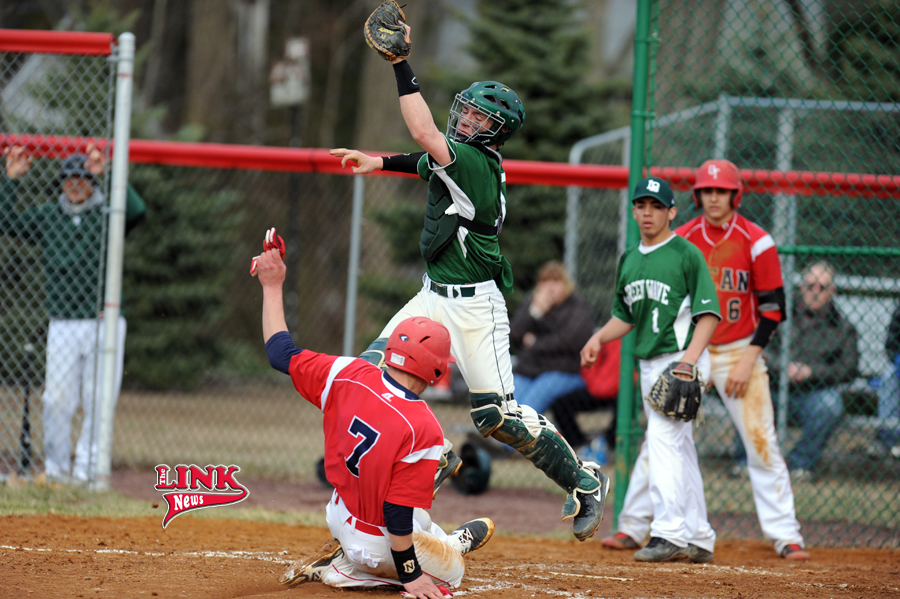 Sliding safely into home for Ocean Township is Zack Godfrey (7), a senior, while Long Branch catcher Nicholas Conklin jumps up for the throw.

Ocean was supposed to start the 2014 baseball season in Long Branch; however the John H. Kahle Baseball Field at High School was saturated from the recent rain, so the game was moved to the Spartans home field, which was recently redone. Both schools play in the B North division of the Shore Conference.

Long Branch is coached by John Perri, who is in his third season. Last year the Green Wave finished 7-18 overall and was 3-9 in the division, tied for sixth out of the seven teams in the B North. Perri during his three years as head coach has an 11-34 record.

Sliding safely into home for Ocean Township is Zack Godfrey (7), a senior, while Long Branch catcher Nicholas Conklin jumps up for the throw.

Starting pitcher for Long Branch High School in the 12-1 loss to Ocean Township High School was Travis Carroll (9) a junior.

Sliding into second for Ocean is Miles Moody (6) and just missing the tag for Long Branch is Conor Mullan (2).

Cip Apicelli is in his fifth year as the Spartans head coach. His squad finished 13-15 last year and was 7-5 in the B North which was good for third place. Overall for his tenure as the head man, Apicelli has a 63-48 record.

April 2, was the day the Ocean hosted Long Branch to start their season. The Wave already had one game under their belt; a loss to Freehold Boro. Taking the mound for Long Branch was Travis Carroll, a junior, and Dan Verderese, a senior who had a 2.62 ERA last year.

The Spartans then turn up the heat on a chilly afternoon. They added two addition runs in the bottom of the second inning, four in the third, one in the fourth, four in the fifth. That gave them a 12-1 advantage over the Green Wave in five innings which according to the mercy rule of the NJSIAA constituted a full game.

“I’m really proud of our guys today,” said Apicelli. One of the strongest aspects of the Spartan game that afternoon was their base running. Speed on the bases and stealing is going to be a problem for their opponents. Ocean was also not trying to kill the ball at the plate; they were making contact, getting on base and then using their speed to get into scoring position. “They played smart ball today and followed all the directions, can’t ask for anything better.”

Apicelli has a different approach this year in coaching. Instead of the usual hand signals associated with baseball, he is calling or shouting plays to his players. “It is something different, but it works best with this group of players,” said Apicelli.

With the 12-1 win, Ocean goes 1-0, while Long Branch drops to 0-2 on the early season. Verderese gets his first victory for the Spartans and Carroll gets his first loss for the Green Wave.