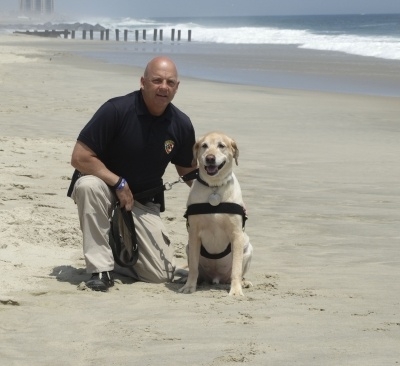 Sheriff Officer Kurt Kroeper with his partner, Evan, who is battling cancer

Freehold: The Monmouth County Sheriff’s Office narcotics detection K-9 Evan has been working as a police dog in the fight against drugs for five years. Now, the seven year old Labrador retriever is fighting for his own life, battling cancer, after recently being diagnosed with lymphoma. Despite Evan’s illness, oncology specialists from the Red Bank Veterinary Hospital, who are administering the course of chemotherapy treatments, have recommended Evan continue his work in law enforcement.

“The Monmouth County Sheriff’s Office is extremely saddened to learn that this extraordinary member of our K-9 unit has fallen ill,” said Sheriff Shaun Golden. “We are grateful that Evan will continue to play a pivotal role in ridding the streets of drugs that plague our county and wish him a healthy recovery.”

Sheriff Officer Kurt Kroeper with his partner, Evan, who is battling cancer

Evan came to the sheriff’s office upon graduating from the Holmdel Township Police Canine Academy. He began service in 2009 with Sheriff’s Officer Kurt Kroeper. Throughout the course of their work, S/O Kroeper and Evan seized an excess of more than $1.1 million in cash, a result of numerous drug investigations. The K-9 team has also located a significant amount of narcotics including heroin, cocaine and marijuana, which led to the arrests of hundreds of individuals. Evan is also a familiar face throughout Monmouth County as he and S/O Kroeper conduct K-9 demos at schools and community events throughout the year.
The Monmouth County Sheriff’s Office K-9 Unit presently consists of five sheriff”s officer/K-9 handlers and dogs which include one narcotic detection team, two explosive detection teams, one narcotic /patrol team & one explosive/ patrol team.

“As K-9 partners, we see the good and bad and go through the best and worst of times together,” said S/O Kurt Kroeper. “I’m grateful Evan and I will remain intact as a law enforcement team and appreciative to the entire Monmouth County Sheriff’s Office for its support during this difficult time.”
The sheriff’s office budgets funding annually for veterinary services of which Evan’s course of treatment will be paid.
If anyone would like to make a donation to the MCSO’s K-9 Unit, checks can be made payable to the Monmouth County Treasurer and sent to 50 East Main St., Freehold, N.J. 07728, with a letter indicating the funds are for the MCSO K-9 Donation Fund. The sheriff’s office K-9 donation fund was established in 1997, after the Monmouth County Sheriff’s Office lost one of its own, K-9 Solo. Solo, a German shepherd, was shot during an attempted apprehension of a wanted individual.

“We are hopeful that Evan’s prognosis remains good,” said Sheriff Golden. “We take great pride in our agency’s highly trained K-9 teams. They have proven to be a valuable asset in promoting law enforcement, maintaining public safety and combatting the proliferation of drugs in Monmouth County.”