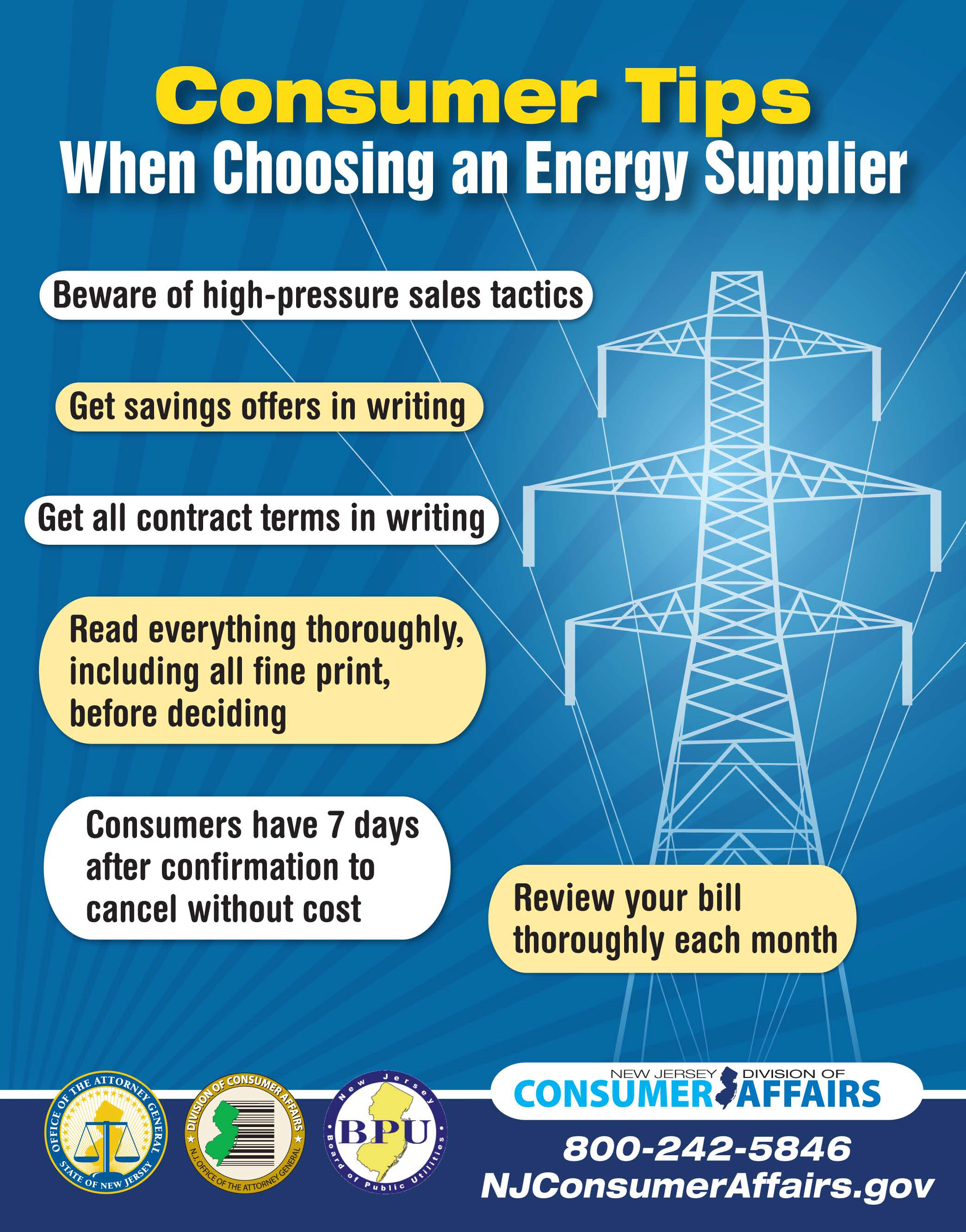 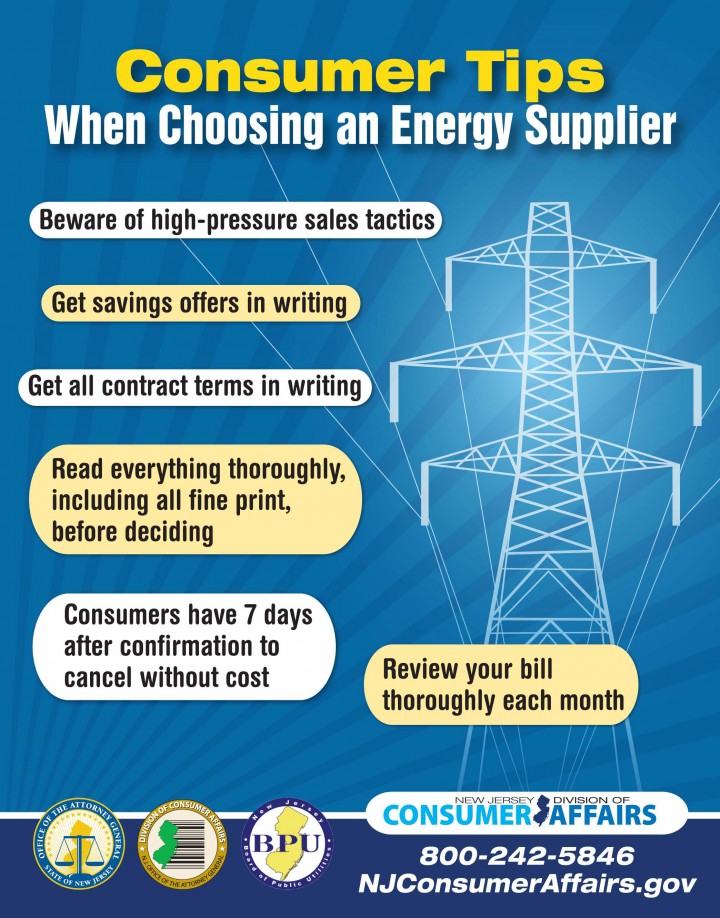 “These three companies allegedly lured consumers with promised monthly savings that turned out to be fictional. Even worse, consumers who hoped to save money instead saw their bills increase to unconscionable levels,” Acting Attorney General John J. Hoffman said. “To be clear, our action relates to the specific practices of these three companies and is not an indication of wrong-doing by other third-party energy suppliers. Deception and misrepresentation of consumers has no place in any aspect of New Jersey’s marketplace.”

The State alleges that the three companies, among other things, deceived consumers through misrepresentations about “competitive” monthly pricing and/or guarantees that consumers would see reductions in their monthly electric and/or natural gas bills if they switched from their utility providers. Rather than realize these savings, the consumers saw their energy bills skyrocket during this past winter when Palmco, HIKO, and Systrum charged far more per kilowatt or therm of energy than the consumers’ previous suppliers. The Complaints allege violations of the Electric Discount and Energy Competition Act, the Consumer Fraud Act, multiple regulations concerning energy licensing and registration, retail choice consumer protection, anti-slamming requirements, and advertising by energy suppliers, and/or the Plain Language Act.

“We allege that these three third-party energy suppliers took advantage of the energy needs of New Jersey’s consumers during an unusually long and cold winter,” said Acting Director of Consumer Affairs Steve Lee. “We hope that the filing of these actions sends a message to all potential wrongdoers that using fraud and deception to entice vulnerable consumers to switch energy suppliers will not pay.”

The State also alleges that Palmco and HIKO engaged in “slamming” by switching customer gas and/or electric accounts without the consumers’ knowledge and consent; as well as other unconscionable commercial practices. The Division of Consumer Affairs, the BPU, and the Better Business Bureau received a total of approximately 1,463 consumer complaints about the three companies.

“My fellow Commissioners and I are very troubled by some Third Party Suppliers’ alleged marketing tactics and the lack of transparency in the terms of their agreements,” said New Jersey Board of Public Utilities President Dianne Solomon. “While today’s announced allegations against a few energy suppliers should send a clear message to the energy supply industry, consumers should understand that there is still a robust market of alternative energy suppliers to be considered that may offer savings on electric and gas bills.”

The State seeks restitution for affected consumers, as well as civil penalties, attorneys’ fees and costs; as well as future adherence to all applicable marketing, advertising, and contract standards.

Palmco, based in Brooklyn, New York, is licensed by BPU as a third-party supplier of electric power and natural gas in New Jersey. Palmco’s website and marketing materials represented “competitive prices” for both natural gas and electricity.

Palmco’s contracts stated that the price for natural gas service would be based on the monthly New York Mercantile Exchange (NYMEX) closing prices for natural gas, and that the price for electric service would be based on monthly locational marginal prices (LMP) determined on a day-ahead or real-time basis. Despite these representations, Palmco’s monthly charges for gas and/or electric were greatly in excess of the NYMEX and LMP closing prices and were not reflective of changes in those closing prices.

However, instead of delivering the represented “competitive” monthly rates or savings, Palmco charged consumers far more per unit of energy than their prior utility companies. For example, for certain consumers, Palmco’s charges per therm for natural gas increased from 83 percent to 712 percent above the rates charged by the consumers’ prior utility. This resulted in monthly natural gas charges that, at times, were several hundred dollars more than the gas prices consumers would have paid if they had stayed with their previous energy supplier.

Palmco’s sales representatives also engaged in overly aggressive and deceptive tactics, both in door-to-door and telephone solicitations. On various occasions, Palmco sales representatives claimed to be employed by or affiliated with the area utility company, failed to inform consumers that they were offering third-party energy supply services, and obtained customer signatures and account information under false pretenses. At times, Palmco sales representatives told consumers that they were investigating illegal overcharges by the consumers’ current energy supplier – and requested account information and/or signatures on forms that turned out to be the Palmco contract. Palmco used such account information to switch consumers’ gas and electric supply, without the consumers’ knowledge or authorization.

At times, Palmco door-to-door sales representatives refused to provide consumers with an opportunity to read their contracts prior to signing, and/or covered the contract text except for the signature line. On other occasions, Palmco sales representatives convinced persons other than the account holder to sign contracts switching the existing account to Palmco’s service.

HIKO, based in Monsey, New York, is licensed by BPU as a third-party supplier of electric power and natural gas in New Jersey. Certain HIKO contracts included the guarantee that consumers would realize monthly savings of from 1 to 7 percent, or in other cases up to 10 percent, during the first six months. In aggressive door-to-door and telephone solicitations, HIKO sales representatives represented to consumers that, after the first six months, rates would never exceed those of their current utility company.

However, instead of delivering the promised monthly savings, HIKO charged consumers far more than the utility companies – on average between 200 percent to 300 percent more per unit of energy, but as high as 710 percent more per kilowatt-hour. This resulted in monthly bills that were significantly higher than the consumers would have paid if they had stayed with their previous energy supplier.

HIKO switched certain customers to its service without authorization. In some door-to-door solicitations, HIKO sales representatives led consumers to believe they were affiliated with their area’s utility company in efforts to induce the customers to enter into contracts with HIKO. Some sales representatives convinced persons other than the account holder to switch the account holders’ electric and/or gas supply service. In other cases, HIKO sales representatives told consumers they could “opt out” or cancel the HIKO contract at any time, but failed to inform consumers that it would take from 30 to 60 days, or one to two billing cycles, to end the charges from HIKO and switch back to their previous suppliers.

When consumers attempted to complain to HIKO, the company failed to respond to consumer complaints and inquiries, virtually providing no way for consumers to cancel their contracts in a timely manner and stop the exorbitant billing. Some consumers who attempted to reach a “live person” at HIKO were only able to reach a voicemail box that was full and would not accept new messages. By failing to provide adequate customer service, HIKO was able to continue billing consumers at exorbitant rates.

Systrum, based in Fairview, is licensed by BPU as a third-party supplier of electric power and natural gas in New Jersey. In its marketing materials and advertisements, Systrum represented that it offered “New Jersey’s Lowest Residential Electric Rates” and promised savings of up to 20 percent on consumers’ monthly electric and/or natural gas bills.

However, instead of delivering the promised monthly savings, Systrum charged consumers far more per unit of energy than the utility companies – as much as 300 percent more per kilowatt-hour. This resulted in monthly bills that were significantly higher than the consumers would have paid if they had stayed with their previous energy provider.

Systrum’s advertisements also lured consumers with the false promise of “no contracts,” in violation of BPU regulations. Despite this statement, Systrum did use contracts, certain of which contained various misrepresentations and omissions of material facts. For example, certain Systrum contracts did not include a required statement of the residential customer’s rights or a complete list of fees, and some included the name “PSE&G” even though PSE&G was not a party to the contract. In addition, certain Systrum contracts required consumers to waive all consumer rights under New Jersey law.

Consumers who sought to cancel their service were often unable to reach a live Systrum customer service representative. Consumers who did reach a representative were told they could not cancel without 30 days’ notice – a requirement included in contracts that consumers had never signed or even seen.

After increasing consumers’ energy bills drastically during the first two months of 2014, Systrum abruptly, and without proper notice, discontinued their services and reverted customers back to their original energy suppliers. At the same time, Systrum deactivated its website, leaving consumers without access to information.

Chief Investigator Laurie Goodman, Investigator/Team Leader Aziza Salikhov and Investigators Jeffrey Watkins and Raquel Williams, of the Office of Consumer Protection within the Division of Consumer Affairs, conducted these investigations.

Consumers who believe they have been affected by unconscionable commercial practices of Palmco, HIKO, Systrum, or any other third-party energy supplier, are urged to contact the Division of Consumer Affairs at 800-242-5846 (toll-free within New Jersey) or 973-504-6200. Consumers who wish to file a complaint are urged to gather all relevant documentation they may have, such as contracts, bills, and marketing or advertising materials. However, a consumer may file a complaint even if he or she is unable to find or access such documentation.

Consumers who believe they have been cheated or scammed by a business, or suspect any other form of consumer abuse, can file a complaint with the State Division of Consumer Affairs by visiting its website or by calling 1-800-242-5846 (toll free within New Jersey) or 973-504-6200.