Belmar Woman Sentenced to State Prison for Defrauding State Out of More than $8,800 Through Temporary Disability Insurance Claim Scheme 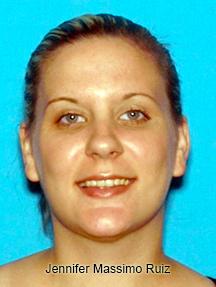 TRENTON – Acting Attorney General John J. Hoffman announced a Monmouth County woman was sentenced to state prison today for defrauding the state out of more than $8,800 by submitting a claim containing fraudulent information to the New Jersey Department of Labor and Workforce Development in order to collect state temporary disability insurance monies to which she was not entitled.

Jennifer Massimo-Ruiz, 32, of Belmar, was sentenced to four years in state prison by Superior Court Judge Robert J. Mega in Union County. The sentence was based on Massimo-Ruiz’s Sept. 9 guilty plea to third-degree insurance fraud. The charge was contained in a July 25, 2013 state grand jury indictment.

Massimo-Ruiz admitted in court today that she submitted three letters to Judge Mega falsely stating that she had cancer. She also admitted to forging the signatures of two doctors on the letters. Massimo admitted that she submitted the letters in an effort to avoid or influence the pending sentencing. As a result of the letters, the Office of the Insurance Fraud Prosecutor and the defendant reached a revised plea agreement in which the state recommended that Massimo be sentenced to four years in state prison rather than three years to which the state had previously agreed in September.

In pleading guilty on Sept. 9, 2013, Massimo-Ruiz admitted that on or about April 19, 2010, she submitted a claim form to the Department of Labor and Workforce Development containing fraudulent information. As a result of the fraud, Massimo-Ruiz received $8,819 in disability insurance benefits to which she was not entitled.