Theater Review: A funny, scary Dinner With The Boys 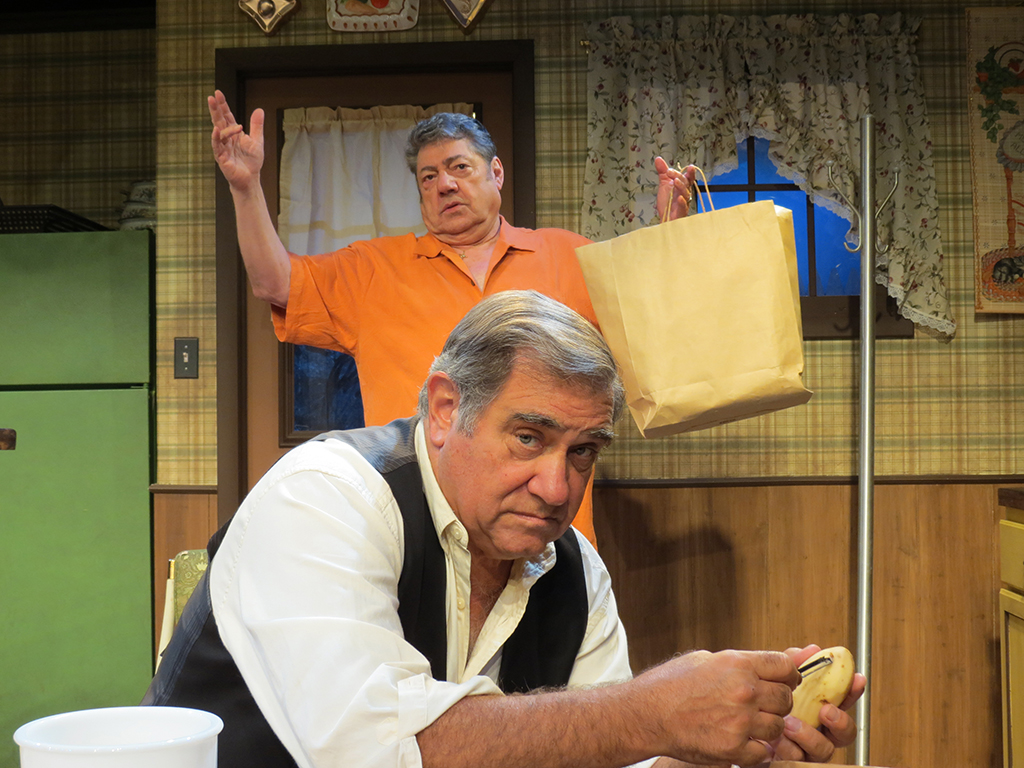 Richard Zavaglia and Dan Lauria prepare the dinner for Dinner With The Boys, now at NJ Rep. (SuzAnne Barabas photo)

By Madeline Schulman
Do you enjoy stories about organized crime families? Do you like the movies The Godfather and Goodfellas, as well the television show The Sopranos? Now you have another chance to meet the fascinating rogues we see on the screen and read about in the papers, if you have “Dinner with the Boys” at NJ Rep. 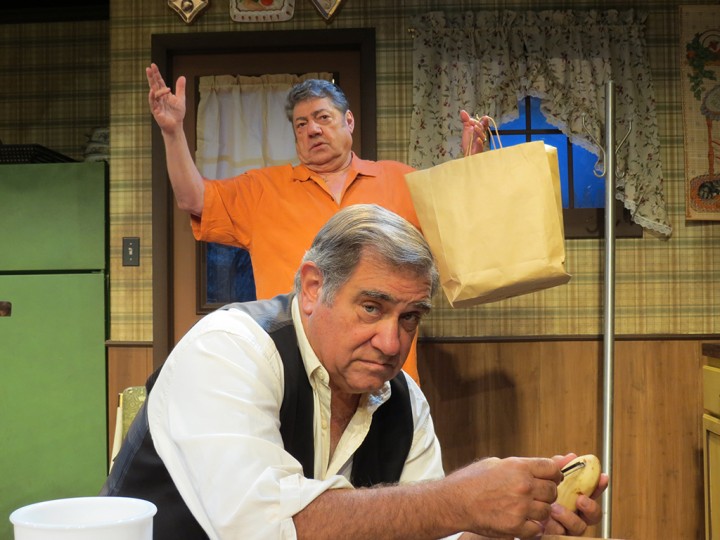 Richard Zavaglia and Dan Lauria prepare the dinner for Dinner With The Boys, now at NJ Rep. (SuzAnne Barabas photo)

In this very black comedy, written by and starring Dan Lauria (of The Wonder Years), we meet Charlie (Lauria) and his friend Dominic (Richard Zavaglia) in the 1970s style kitchen of a house in the wilds of New Jersey, three hours from beloved Brooklyn. They have been banished by Big Anthony Jr., (Ray Abruzzo) head of the Family, for misdeeds which will be revealed throughout the play.

The set, designed by Jessica Parks, is so authentic that the audience member in front of me exclaimed that the coffee pot, portable black and white TV, and copper molds on the wall had been taken from her kitchen!

Six months ago, Charlie and Dominic were fixtures of the Family. Irascible Charlie and his departed friend Leo were enforcers, and more tender-heartedly emotional Dominic was the Family cook. In exile, Dominic whips up gourmet meals with produce from Charlie’s garden, while Charlie reminisces in sometimes gruesome detail how he and Leo dispatched pimps, bookies, and assorted rats.

Our anti-heroes live in fear of Big Anthony Jr., played with a great mixture of humor and ferocity by Abruzzi, and his terrifying The Uncle Sid (the legendary Morris “Moe” Rosenbaum, exactly as good as Abruzzi). As Charlie says, their mouths are full of blood. After all this time, Big Anthony Jr. is coming for a special Sunday dinner with the boys. That does not bode well.

Charlie and Dominic are amusing company. Cooped up together in exile as they are, they constantly fight and make up, but we can see clearly by the excellent acting of Lauria and Zavaglia and direction by Frank Megna, that they truly love each other in an Odd Couple fashion. They have a funny way with the English language. Dominic says that “Big Anthony Jr.’s heart” is a “moron ox,” and Charlie boasts that he is famous as a “raccoonteur.”

There is onstage and offstage bloodshed in Dinner with the Boys. Accept the invitation, but watch your hosts and fellow guests carefully. Remember the little old ladies of Arsenic and Old Lace and their elderberry wine before savoring Dominic’s delicious little white meatballs and his cheesecake. The secret ingredient is orange rind!

Dinner With the Boys plays at NJ Rep, 179 Broadway, Long Branch, and runs through Oct. 5. Performances are Thursdays and Fridays at 8 p.m.; Saturdays at 3 and 8 p.m.; Sundays at 2 p.m. and 7pm. Due to popular demand, extra performances have been added on Wednesday, Sept. 24 and Oct 1 at 7 p.m.