It was all Gray for Olsen

‘Shake It For the Cure to support Jacqueline M. Wilentz Comprehensive Breast Center 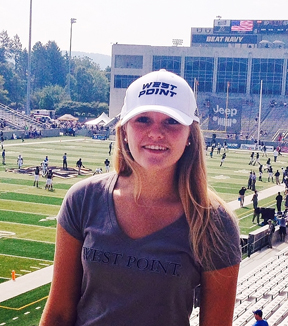 Wearing the West Point “Gray” is Emily Olsen a senior at Shore Regional High School who on September 11, committed to West Point US Military Academy to be a part of the first ever woman’s lacrosse team that will play in the Patriot League in 2016.

While most people think the gray area is for those who can’t make a decision, which is not the case with Emily Olsen, a senior at Shore Regional High School. That color quickly became her favorite, as it is what the cadets at West Point wear.

Wearing the West Point “Gray” is Emily Olsen a senior at Shore Regional High School who on September 11, committed to West Point US Military Academy to be a part of the first ever woman’s lacrosse team that will play in the Patriot League in 2016.

On September 11, Olsen made it official that she will be attending West Point US Military Academy and playing lacrosse for head coach Kristen Waagbo. It is also the first time in the illustrious history of West Point which dates back to President Thomas Jefferson in 1802, that women’s lacrosse team will be fielded.

“My cousin, Army Captain Bo Olsen, graduated from West Point, so I was able to experience it at an early age. I was a little apprehensive at first knowing the commitment that a cadet must make, but once I met the coaches and spoke with some current female cadets, I knew this was the right place for me,” said Olsen.

West Point does not just accept anyone into its distinguished halls. Perspective cadets must be in the higher levels of their high school classes academically, scoring high on the American College Testing Exam or the Scholastic Assessment Test. They must have four years of English, mathematics (pre-calculus and calculus), two years of a foreign language, two years of laboratory science, one year of U.S. History, plus geography, government, economics and computing.

Physically each cadet must go through a rigorous physical and continue with vigorous training while in the academy. Candidates must be at least 17 years old and not yet 23, a U.S. citizen, unless they are from an international cadet, and they must be unmarried and not pregnant or legally obligated to support a dependent when entering. All those entering must also have a Congressional endorsement. “The traditions, the history and the leaders that have come from West Point are second to none,” added Olsen.

As a student at Shore Regional, Olsen is in all “AP” advanced placement courses and “IB” International Baccalaureate classes and holds a 102.18 grade point average. This will be her fourth year on varsity lacrosse and basketball, where she will be captain of both squads. In her off time she plays on a travel T3 lacrosse team.

What amazes many people who watch Olsen play lacrosse is that she only picked up the stick three years ago. “Lacrosse is basketball with a stick, some people say,” said Olsen. “Much of the same skills you learn in basketball you can use in lacrosse. Coach Waags told me she loves the physical style of defense I play, and I’m really excited to get stated.” She added that she wants to be a part of West Point, and playing for the first ever women’s lacrosse team will be quite an honor.

“It’s an incredible honor to be even considered to be a candidate for entry into West Point, especially for a woman. It takes a certain type of person to be able to be succeed playing a Division 1 sport, along with their heavy engineering and math study load, all while training to become an Army officer,” said Rus Olsen, Emily’s proud dad. His brother, Brad Olsen’s son is Captain Bo Olsen.

“We could not be more proud of the decision Emily has made,” said Lisa Olsen, Emily’s mom. “The coaches were awesome, the facilities and campus are incredible. And the reward of that type of education is priceless.”

As a junior, Emily was selected by US Lacrosse as a 2014 Academic All-American. She knows that this year, 2015 will be a strong season for both the basketball team and lacrosse team. The West Point lacrosse team will compete in the Patriot League of the NCAA Division 1 in the spring of 2016.