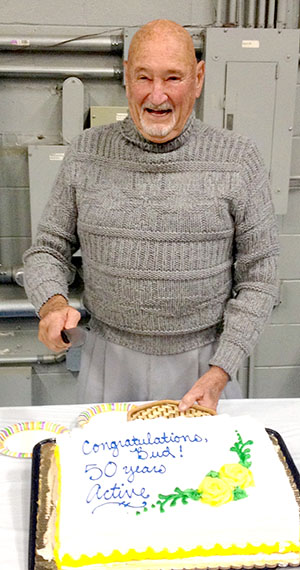 Clarence “Buddy” Brocklebank with his cake honoring 50 years of service with the Oceanport Fire Company.

After dinner several people were recognized for their services.

With the help of Vice President Frank Van Brunt the following presentations were made:

• Certificates of Service Awards to Ex-Chief and Captain Kenneth T. Carroll and 1st Lt. Paul M. Van Brunt in recognition of 15 dedicated years of service as a Port-Au-Peck Fireman.

The highlight of the evening was the award presented to ex-chief and life member Clarence D. “Buddy” Brocklebank Sr., in recognition of 50 dedicated continuos active years as a Port-Au-Peck fireman.
Buddy introduced his wife Patty and his two sons Donny And Matt, and their wives.

President De Santis·gave a brief summary of Buddy’s background and an explanation of active duty. Buddy has been active ever since he joined the company in 1964. He is the only member on record known to have actively served 50 continuous years in the 98 year history of the company.

Buddy was presented with a framed American flag flown on September 11, 2014 over Camp Alpha, Bagram Airfield, Afghanistan, in his honor for his time in service to his community. This was made possible by regular Army Staff Sgt. Sean Meenan, a medic who is serving with the 82nd Airborne, Ground Combat Brigade, 508th Regiment. Sgt. Meenan served a tour of duty on Iraq and two tours in Afghanistan.
Sgt. Meenan is the son in law of Steve Tagarty of Oceanport.