Five seek three seats on Long Branch Board of Education

Theater review: A family seeking in Angels and Ministers of Grace 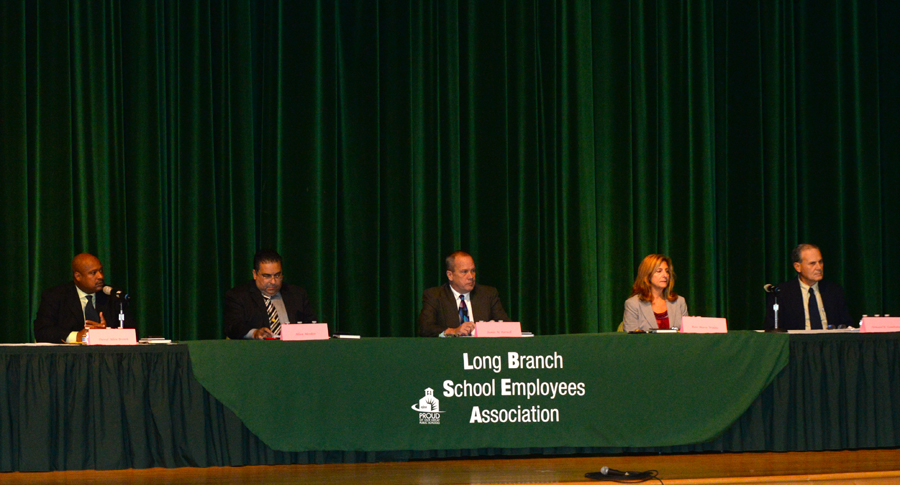 By Neil Schulman
Long Branch — The five candidates seeking the three seats on the Long Branch Board of Education agree that board members should work together for the benefit of the children. But each argues that they can bring a set of skills and experience to the table to help do that. 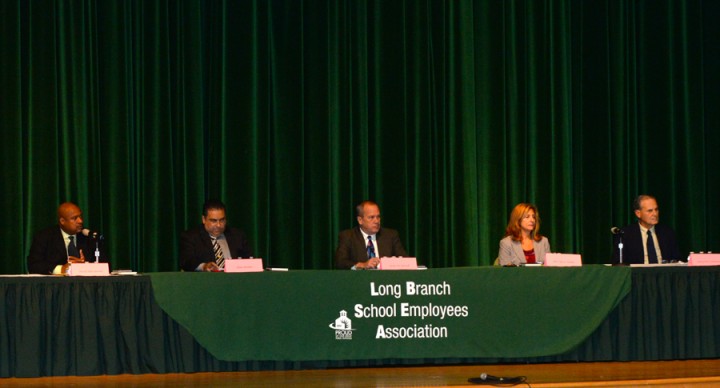 Current board members James Parnell, Allan Menkin and Armand R. Zambrano Jr. are being challenged by Rose Marie Widdis, a former board member, and David Allan Brown in the November 4 election.
The Oct. 30 Candidate Forum, sponsored by the Long Branch School Employees Association and moderated by the Red Bank Area League of Women Voters, gave the five a chance to speak on some of the issues affecting the school.
Here are some of their responses to various questions asked that night:

When candidate were asked how to improve scores in academic areas which are still below average:

Menkin said that many new initiatives have been put in place, “starting at the preschool level” to ensure students are ready for the academics in high school. He also noted that Long Branch was the only district in the state to offer engineering programs at all three levels.

Parnell said that the school had recently added more Advanced Placement classes, designed to teach college level skills. They also work to support student growth, and hold education seminars for the teachers. “I think we’re on the right track,” he said.

Zambrano said that the school was always evaluating and reviving the curriculum. “It starts down at the preschool,” he said. When a student wants a class that Long Branch doesn’t offer, the district sees if they can get it from a nearby school such as Ocean Township – and has been known to take students from other schools who want a specific Long Branch class.

Brown said that more tutoring opportunities and keeping class sizes small could help. He also said that one of his campaign platforms is to get enough textbooks for the children. “Every child needs to have a book for every class,” he said.

Widdis said that she supported working to individualize the lessons for all students, saying the board must support the administration.

When asked how to lower costs, without affecting staff, salaries and programs:

Widdis called for investigating more sources of federal and state funding, and seeking more grants. She also said that Long Branch should design 5, 10 and 15-year programs for all facilities, to avoid being surprised by costs there. In general, the schools need to be proactive, she said.

Parnell pointed out the new health center which has opened this year for employees and their families, providing medical care at the school. Before this, health insurance premiums were going up $1-2 million a year, he said; this should halt that.

Brown said that he believes “the district is moving in the right direction,” saying he approves of the health center. He also approves of the solar panels installed at the schools.

Zambrano said that the district could examine the budget for small ways to save which could add up.

On ESL (English as a Second Language) programs:

Menkin said that programs in pre-K and Kindergarten were designed to start addressing these needs at an early age, teaching reading and writing skills to students.

Brown said that it was important not to dismiss the students – or their parents – because of what language they spoke. “I put my campaign literature in English and Spanish,” he said.

Widdis said that in the past the schools had an ESL program which integrated the students into standard classes over the course of three years, and proved effective. If the current system isn’t working, “it’s something we need to relook at.”

Zambrano acknowledged it was a challenge the school was looking to address, especially for preschool students. He noted that new classes were designed to transfer language use at home to experience at school.

Parnell said a large percentage of the school’s students were Hispanic, and while it might be a “sore subject” for some, ensuring the education of non-English speakers is required by law. “It’s the American way. Right now, it is the Long Branch way,” he said.

When asked about goals for the coming years as a board member:

Widdis said that the school should work to “bring more parents in, especially those who are not English speaking,” teaching them so they can work with their children. She suggested workshops for parents.

Zambrano said that there used ot be workshop sessions for parents, something worth thinking about bringing back.

Brown said that he’d like to see the graduation rate improved. “It’s good, but we want it at 100 percent,” he said. He again said he wants all children to have books for class.