Rates to be set for lockers, cabanas by city beaches 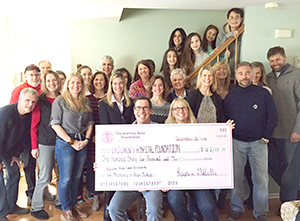 Oceanport — The Kortney Rose Foundation (KRF) recently presented a check in the amount of $162,000 to The Children’s Hospital of Philadelphia for the 2014 fundraising year. This is the eighth annual donation from the foundation in support of pediatric brain tumor research, and the largest to date.

The foundation has now donated a total of $910,000 in memory of the founder’s daughter Kortney, who died from a brain tumor in 2006.

KRF’s 2014 donation was also made in memoriam to Alex Munoz, a 16-year-old Oceanport resident who lost his 19-month battle with a brain tumor in November.

Paramount to KRF’s most successful fundraising year was the local community’s rally to support and honor Munoz who was passionate about helping other children avoid this disease through the promise of research.
The foundation experienced a particularly collaborative fundraising effort with several area families raising money in memory and/or in honor of their child with a brain tumor. 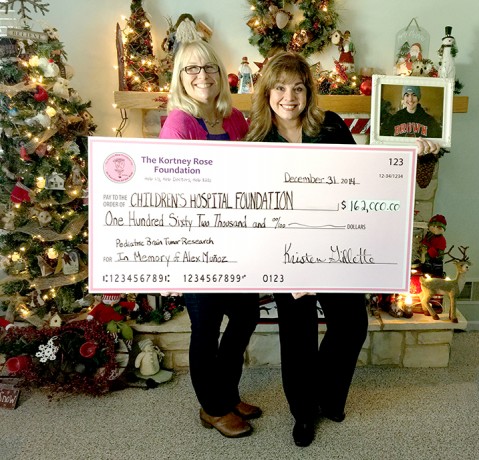 KRF founder Kristen Gillette and Laura Munoz. Munoz’s son, Alex, died in 2014 of a brain tumor, and helped the Foundation raise funds for researching the disease.

“We especially want to thank the family and friends who donated in memory of Kortney Gillette, Alex Munoz, Hannah Duffy, Matthew Remer, and Cara Gallatro; and in honor of Tabitha Kingalahua and Dominic Vigorito. These children and their families know first-hand that research is crucial in the battle against brain tumors,” said Kristen Gillette, mother of Kortney and founder of the Kortney Rose Foundation.

“The fact that pediatric brain cancer is the leading tumor cause of cancer death among children is clearly and unfortunately hitting home.”

Another important sponsor is the Turning Point Restaurant organization, which annually teams up with The Kortney Rose Foundation and hosts “The Great Food for a Great Cause Fundraiser” at all Turning Point

Restaurant locations. Mark your calendars for this year’s “Great” event, which will be held March 21 and 22.
Kortney Rose Gillette was a nine-year old girl with a winning smile and unparalleled zest for life. She loved playing with friends and animals (stuffed or real) and enjoyed school at Wolf Hill Elementary School in Oceanport. This didn’t change even after her diagnosis of a terminal brainstem glioma. On April 27, 2006, four months after her diagnosis, Kortney lost her battle with this pediatric brain cancer.

The Kortney Rose Foundation (KRF) was founded by Kortney’s mother to honor Kortney’s memory and celebrate her life. Brain tumors are the #1 solid tumor cause of death in children 20 and under with more than 3,500 children diagnosed annually.

KRF was incorporated as a 501(c)(3) in 2007 to raise money for pediatric brain cancer research. More than 95 percent of every dollar donated to KRF goes directly to the life-saving research at The Children’s Hospital of Philadelphia, specifically their Large-Scale Genome Project and the new world-class Children’s Brain Tumor Tissue Consortium.