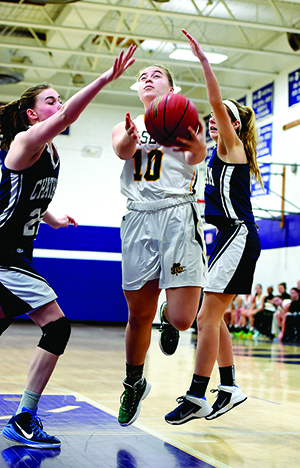 Red Bank Catholic’s Gillian Hansen (10) goes in for a layup with double coverage.

By Jim Hintelmann
RUMSON – Red Bank Catholic’s girls basketball team received a scare from Chatham in the first Lady Bulldog Girls Basketball Challenge Sunday, but the Caseys (9-2) never lost their poise and came through when it was necessary to post a 59-49 victory over the Cougars.

Red Bank Catholic’s Gillian Hansen (10) goes in for a layup with double coverage.

In defeating the Cougars, RBC had to stop junior guard Cassandra Falone, who almost singlehandedly kept Chatham in the game in the first half when she scored 17 of her game-high 24 points.

“We knew about her,” said RBC coach Joe Montano. “She was outstanding, but I thought that our defense, especially Josie Larkins, did a good job containing her in the second half. I was proud of her.”

Chatham took an early 6-3 lead on a pair of treys by Falone and held the lead much of the half. It had its biggest lead at 22-16 midway in the second quarter, but RBC outscored the Cougars 15-6 the rest of the half to take a 31-17 lead. Barazotti, the lone senior on the team, had five points in the run.

Junior Maureen Coakley (20 points) scored 15 of her points in the second half to help RBC keep its lead.
The closest Chatham got in the second half was 36-33 on layups by Chloe Blanc and Olivia
Diaz-Saavedra, but Barazotti had a big three-pointer to make it a six-point lead. 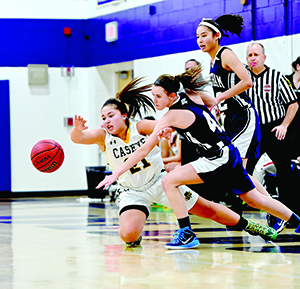 Chatham (8-5) still trailed only 46-40 early in the fourth when RBC scored the next nine points, eight of them by Coakley, to open it up to 53-40 with three minutes remaining The closest Chatham got after that was eight points.

“We’re a young team and still learning from each other,” said Montano. “Coakley really battled to get rebounds, it seemed she really wanted to get every ball that came off the glass.”