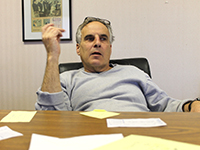 By Patty Booth O’Neill
Long Branch — It was good news for the city. Last Thursday Long Branch received approval from the NJ Department of Coastal Management to go forward with construction on the boardwalk.

“We are really excited,” said Mayor Adam Schneider. “We had to answer dozens of questions, we revised our plans and submitted them in November. We finally got the approval on Thursday.”

That was the second hurdle the city had to get by. The first was dealing with FEMA.

Schneider said it’s been a long, slow frustrating process, with dozens of meetings with FEMA and NJ Department of Environmental Protection engineers to build a better, safer boardwalk that will also look nice. He said they are going to build the boardwalk wider, and if it needs any kind of upgrades after that’s done, they will be done in the future.

The third hurdle, putting the job out to bid, is still in the works. “We’re hoping to award a contract in March and begin construction in May,” Schneider said. Which means there will be a summer with construction going on.

“We are not stopping the job because of summer, though a lot of people will be very angry,” Adam said.
“If it would have been one hundred percent our discretion we would have done it differently, but that’s not how it works.”

He said that if all they had to do was lay planks down that would have been easy, but it’s a lot more complicated than that. They have to deal the bluff, engineering problems, and the V-zone, areas where FEMA says are prone to storms and flooding and extra care must be taken.

“Some people look at this and say we screwed up, and that’s okay, it’s part of the political game,” Schneider said.

“I’m not sure if people completely understand. The day the storm hit, our workload went up significantly. There have been a whole different set of problems for me, the council and staff,” Schneider said. He said they’ve been working on them almost daily for the last two and a half years. Not just on the boardwalk, also a couple of parks, interaction with state bureaucracy, and dealing with insurance carriers and home owners.
“Since the storm, getting things right has been hard,” he said. “I think we’ve managed it very will.”

Boardwalk construction will start north and head south to hit all beach access points. Improvement will also be included, such as cabanas and lockers. Schneider said there will be a lot of demand, and once people buy a cabana they will keep coming year after year. Their family and friends will come.

“They can leave their stuff there, they’ll stay late, have dinner. It will make things easy for them and it will create a wonderful atmosphere,” he said. “I’d rather have people say they’d rather come to Long Branch than some other town.”

Schneider said that the city will  have a lot going on in the next couple of years. The Boardwalk, a mid-rise on the corner of Bath and Ocean avenues, Pier Village Phase 3, some projects in Beachfront South, and the CVS Pharmacy and the beer garden at the end of Broadway.

The Pier? “The pier still has a pulse,” Adam said. “ There’s been times we’ve been ready to give up on it, but we’re not. There are still discussions taking place with professionals, the FTA (Federal Transit Administration) and users that make me think it could still happen.”
Another big project people in Long Branch would like to see more progress on is lower Broadway, although there is still no time estimate on when the project will begin.

Before Pier Village or any development took place, Schneider said the city’s goal has alway been how to get people on the beach to the other side of the street and up Broadway?

“The first meeting we ever had with Jane Thompson (Thompson  Design Group) we were saying Broadway, Broadway, we have to develop Broadway. She said, ‘beachfront, beachfront.’”

“It’s a slow process.” The last six years have been one of the worst economic downturns since the Great Depression, “but we are getting there,” Schneider said.

When the new property owner, DRA (Diversified Realty Advisors) presented their plans last spring and fall, there was a concern that they were not on the same page as the city. “This has to be a retail project,” Adam said. “Not mediocre housing.”

He said there was a real concern that if DRA was allowed to start phase one and it didn’t go well, it would kill everything else, they’d be gone and the city would be left with a pile of garbage.

“We met with them and they are absolutely saying the right things about what they want to do and what we want to see,” Adam said. He said after meeting and discussions they now understand what the city is looking for.”

One exciting project DRA proposed last week is a  market like Philadelphia’s Reading Terminal Market. An indoor warehouse-light industrial space that will house a number of eateries and shops.

“People will go to a concert, look for places to visit or eat. They have the theater, they’ll have the beer garden. Ninety days out of the year they have the beach.

“If that market goes through there won’t be anything else like it in New Jersey,” Schneider said.