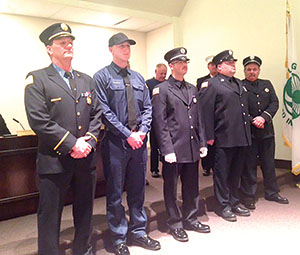 Chief Ron Guidetti and his team were honored for rescuing a trapped motorist in Long Branch.

By Carol Gorga Williams
Long Branch — On Aug.8, the Long Branch Fire Department and engines 975 and 2570 rushed to help Monmouth Beach volunteers battle a structure fire in the borough.

Chief Ron Guidetti and his team were honored for rescuing a trapped motorist in Long Branch. 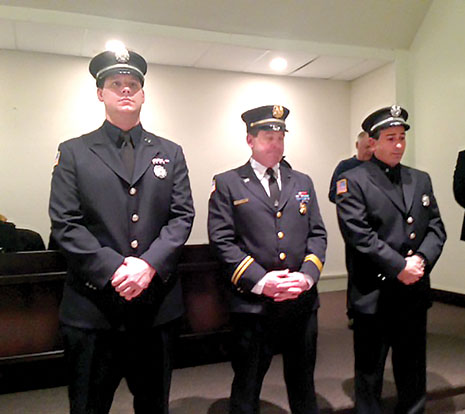 Captain Timothy Somers (center) and firefighters Henry “Skip” Cioffi and Nick Saffioti were honored for saving the life of a fellow firefighter in Monmouth Beach.

After a quick status report from Monmouth Beach Chief Ed Marsh, Long Branch Fire Captain Timothy Somers dispatched his firefighters into the home at 4 Ice House Road where heavy smoke was billowing from the house’s third floor and attic.

Somers encountered heavy smoke as well in the second-floor hallway and directed Firefighter Frank Harris to search for hidden fire in the ceiling and walls.

As Harris was working — and obscured from the view of the others by the smoke and heat — he felt the floor beneath him collapsing. He was trapped at chest level and dangling above a 30-foot entrance atrium.
The code he called over his radio – technically a “May Day” transmission – was filled with understatement when he transmitted “firefighter needs assistance.”

Firefighter Henry Cioffi was the first to find Harris.

Somers arrived milliseconds later and together they dragged Harris to safety. Firefighter Nicholas Saffioti – who was ventilating the fire room – assisted.

Somers, Cioffi and Saffioti were honored for their heroism that day by Chief Kevin Stout and Mayor Adam Schneider at a presentation last week. But perhaps the more significant acknowledgement came from Harris, who first saluted the men and then hugged them.

“Their quick and heroic action kept Harris from serious injury that day,” the chief said at the awards ceremony.
Saffioti “performed a highly creditable act in the line of duty, showing initiative and accomplishment by conducting ventilation operations under heavy smoke and heat conditions that provided firefighters the visibility needed to search and successfully rescue a trapped firefighter,” according to a report of the event.
The city and the Uniformed Firefighters Association presented Saffioti with the Meritorious 2nd Class

Exceptional Duty Ribbon. Somers and Cioffi “performed an act in the line of duty,” with complete disregard of their personal safety, resulting in the rescue of a trapped brother firefighter, according to the text of the award. They were presented with the Valor 3rd class Life Saving Medal and Ribbon.

* * *
The three awards were part of a recognition ceremony that also included awards for quick and innovative thinking by the city’s rescue squads, including a Nov. 14 call near the Lenna Conrow School on Long Branch Avenue.

Shortly after 11 p.m., firefighters arrived to find a late-model Honda minivan had hit a power pole, shearing it in half.

The victim had been partially ejected but was unable to pull his head through the heavy safety glass of the windshield. He was bleeding a great deal and struggling to free himself, officials reported.

Firefighters had to simultaneously work on getting the victim to calm down so he did not make his injuries worse and stabilize the scene.

Under the command of Assistant Chief Ron Guidetti, firefighters worked on removing the glass piece by piece to enlarge the opening trapping the victim’s head.

Using glass cutting saws, Guidetti’s team was able to remove enough of the shattered and cracked glass to free the victim.

Meanwhile, other members were working to remove the roof and door of the van so the victim could be placed on a backboard for transport by a waiting ambulance.
The victim has now recovered, officials said.

Honored for their efforts were Guidetti, Lt. James Cook and Firefighters Thomas Fleming, David Phillips, James Migliaccio and Vincent Roselli. For a rescue under unusual circumstances, they earned the Unit Citation ribbon with technical rescue cluster.

* * *
Just a short four weeks later, on Dec. 13, firefighters responded to the report of a structure fire at 55 Chelsea Ave., a four-story, multi-dwelling wood frame dwelling.

About 1:40 p.m., while traveling north on Ocean Boulevard, firefighters noticed heavy smoke near Pier Village, noting the source seemed to be a third-floor exterior balcony.

Lt. Jason Smuro assumed control and as they entered the building, the apartment owner met them in the lobby and said the fire had broken through and her unit was now ablaze.

Firefighters evacuated the area and quickly knocked down the fire, opening the ceilings and walls to stop any embers or undetected fire from traveling to adjoining units and upper floors.

“Their quick and decisive actions likely saved the structure from a costly and devastating fire loss,” according to the report of the event.

Smuro and Firefighters Timothy Griffin, Mark Garced and Ken Banach Jr. were honored for exceptional team work. The fire, if “it had not been controlled in a timely manner “would have resulted in a heavy fire loss,” said the chief. The firefighters received the Unit Citation ribbon.