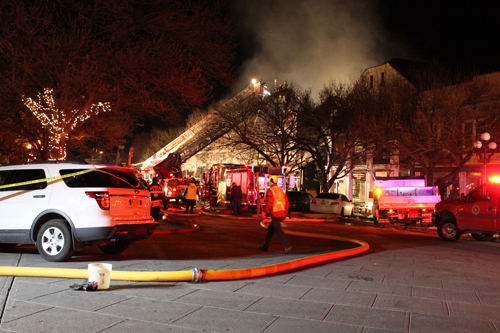 By Patty Booth O’Neill
At around 4:00 Friday afternoon, a three-alarm fire broke out in an apartment building on Main Avenue in Ocean Grove. The fire started in an apartment at the back of the building on the top floor facing Heck Street. The structure housed four street-level shops with apartments on second and third floors. Village Plaza, Barbaric Bean Coffee Roasters, Yvonne’s Cafe, Smugglers Cove, and seven apartments were all destroyed.

At this time no major injuries were reported, but a firefighter did slip on the ice. A woman who was a tenant in the building, sadly watching everything she owned go up in smoke, said that three dogs also got out.  It was discovered later that a dog did perish in the blaze.

Firefighters arrived from surrounding towns and fought the fire while smoke billowed into the sky, visible from miles away.

Blocks surrounding the conflagration were taped off keeping  traffic, bystanders and media from getting too close, meanwhile news helicopters circled the area.  On Main St. firefighters were heard discussing not getting enough water pressure from the fire hydrants and they decided to run a line to Fletcher Lake, which seemed to work.

By evening a blaze was not as visible, but smoke was still billowing from the roof of the structure.  Firefighters concentrated their hoses from ladder trucks onto the roof that had collapsed, and at ground level. There was fear that the fire would spread to other structures because the buildings are so close and old in Ocean Grove, but firefighters soaked adjacent buildings and did a great job keeping the fire contained to the one structure.

Chris Jimenez, who lives next door to 50 Main Avenue, said that he was impressed with how fast the firefighters contained the flames. Business owners next door were also amazed and thankful that none of their businesses were damaged, although some houses on Heck St. did receive some damage.

On Saturday morning bulldozers were already tearing down and removing 50 Main Avenue.

The cause of the fire is still unknown.  An investigation is being conducted by the Neptune Township police, Monmouth County Prosecutor’s Office and the Monmouth County Fire Marshal.