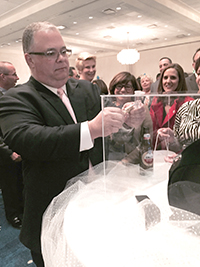 By Patty Booth O’Neill
Friday was a big day for Long Branch, the Chamber of Commerce and recipients of the Louis G. Libutti Award. The gala, held at the Ocean Place, was attended by over 200 guests.
The award went to three men who are mainstays in the city, Tony Perri, owner of Fine Fare supermarket and Sam Nativo and Michael Bienz, owners of Mix Lounge and 2nd Floor Restaurant.

While receiving his award Tony spoke about how he and his dad opened Fine Fare on Third Avenue in 1977, and it’s still a true mom and pop store. He now works with his wife Karen and son Michael — although he considers everyone who works for him a part of a big family.

Tony spoke about surviving ups and downs over the years and admitted that Superstorm Sandy was the hardest to obstacle to overcome. But many at the dinner remembered how he kept his doors open after the superstorm hit and workers escorted customers down dark aisles with a flashlight to make sure they did not go without.

“He is an amazing person,” said Chamber Director Nancy Kleiberg. “People don’t know how much he does for the Long Branch community. He does everything under the radar. He is well deserving of this award.”

The second Libutti award went to Sam Nativo and Mike Bienz, Long Branch’s most lovable couple.
They spoke about their journey from New York to open a martini bar on Broadway in Long Branch, ending up on Brighton Ave. and finally making Long Branch their permanent home.

“We knew at once that we loved this town,” Mike said. “For the longest time we were commuting back and forth. It was hard on us.”
“People invited us to stay in their home so we didn’t have to commute so much,” Sam said. “They hardly knew us, but opened up their homes to us!”

That is a testament to the friendships they built and how people trust and adore Sam and Mike. They have such a positive outlook, people are just drawn to them.

Whenever there is a disaster in the area, like Superstorm Sandy and the 2012 West End fire, Mike and Sam were the first to step up to raise money for those in need.

“They are organizers and doers,” said Suzie Woolley from the Long Branch Chamber of Commerce. “When the fire happened in West End they weren’t even in the state. When they found out they did a U-turn and were the first to unite the city to help those who lost everything they owned.”

Another award handed out was the Business Improvement Award which went to 400 Broadway Business Park where the old ice house used to be.

The President’s Award went to the Dr. Barry Elbaum Dental Health Center which opened in the spring on Broadway.

There were many prizes for the silent auction donated by local businesses. A fun new addition was a big hit of the night. In a large plexiglass box were a necklace, earring and bracelet set, and a man’s watch donated by The Stone Hut in Pier Village.

Fifty keys were soon sold out to guests with a two in fifty chance to open a padlock securing the box. It was great fun as bystanders cheered each other on. Winning the jewelry set, with great surprise (see photo) was Nancy Kleiberg and winning the man’s watch was Joe Graziano.

Another hit of the night was the silent auction with coveted prizes, such as a Go Pro, a bicycle from the Peddler, restaurant gift baskets or items to be bid on for the kids. All through the night bidders ran over to the tables to make sure they were not outbidded.
It was a night full of fun, food, music and great people.