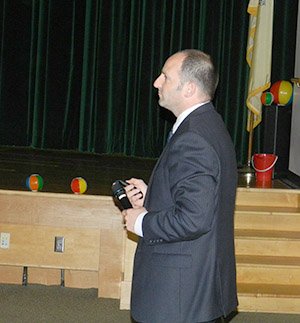 By Neil Schulman
Long Branch — In its first half year of use, the Long Branch School District’s health center saved $750,000 in healthcare costs — enough to pay the salaries of 15 teachers.

During a budget presentation held at the April 29 Board of Education meeting, Superintendent Dr. Michael Salvatore said that the health center was one of the major reasons Long Branch schools could present a budget that was only two percent higher than last year’s, despite record enrollment, with more than 200 new students coming.

The proposed budget for the next school year is $95.3 million, up from this year’s $93.2 million. Unfortunately, declines in state and federal aid mean that local taxpayers will bear a higher portion of the taxes, which will go up about 7 cents per $100 of assessed property value.

Salvatore said a home assessed at $365,000 would pay $23 more each month in property taxes.

When designing the budget, the administration’s goal was “to maintain the quality programs and people we have working for us,” Salvatore said.

He said the school managed to keep the budget increase to two percent despite dealing with record numbers of students.

“We have the highest enrollment ever in Long Branch school history,” he said. And those numbers are expected to grow by 200.
According to documents at the board meeting, in March of this year 5,722 students were registered in the school system. That’s up from 5,613 last year.

In recent years, more pre-schoolers have been enrolled in the school; they now comprise more than 800 of the students.
One of the ways that the district has been able to save is by creating its own health center, allowing faculty and their family members to see doctors on site with no co-pay or deductible.

Long Branch adopted this as a way to reduce its rising healthcare costs – and the cost to its employees.

Salvatore said the end result has been a $750,000 savings so far for the district. They predict over the next four years, it will result in $4.4 million in savings.

“The change the board invested in… helped us keep more teachers this year, and helped preserve quality programs,” he said.