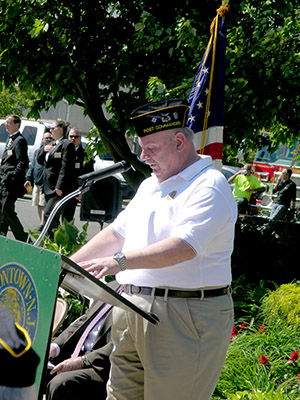 Eatontown’s Ken Gurbisz, shown at a 2013 Memorial Day ceremony, chairs the committee which has designed and is funding the New Jersey Gold Star Family Monument.

By Coleen Burnett
On May 3, ground was finally broken in Holmdel for the New Jersey Gold Star Family Monument. The sculpture, made to honor families who have lost a loved one in active combat, will finally be erected near the New Jersey Vietnam Veteran’s Memorial in Holmdel.

Eatontown’s Ken Gurbisz, shown at a 2013 Memorial Day ceremony, chairs the committee which has designed and is funding the New Jersey Gold Star Family Monument.

It was a day that Eatontown’s Ken Gurbisz and his wife Helen, along with many others, had worked hard to make happen. The Gurbiszes are members of the Board of Trustees for the Monument, which will be officially dedicated this September 27.

Their son, Army Capt. James M. Gurbisz, was killed on November 4, 2005 when an improvised explosive device, or IED, detonated near his Humvee. He was only 25 years old, and had been in Iraq for ten months. He was expected to come home the following January. Gurbisz left behind a wife — and many memories for his friends and family.

His dad remembers his son as a typical kid who was a great athlete. The younger Gurbisz played baseball and football at Monmouth Regional High School, and chose to attend West Point despite getting offers from several Ivy League schools to play sports.

“All my memories are very good memories,” said his father.

The roots of the monument were sown in 2013, when the Board of Trustees of the New Jersey Run For The Fallen formed the New Jersey Gold Star Family Monument Foundation. Long active in the programs of the Vietnam Memorial, Ken and Helen were asked to chair the committee that would design, fund, and build the new memorial.

Gurbisz noted that some 10,000 students a year visit the New Jersey Vietnam Veterans Memorial alone, and he hopes they come away with a bit more of an education by the time their visit at the new monument is finished.

“Most of them don’t know what a Gold Star Family is,” he said.

The concept began during World War I, when families would put a small banner of one or more blue stars in their windows, indicating they had an active-duty family member fighting overseas.  “If they lost a loved one, you changed the blue to gold,” explained Gurbisz.

Working on the memorial has helped to ease the pain of his son’s death. “Most don’t realize the sacrifices that are made by the Gold Star families,” he said.

“The entire family suffers when you lose something like that. Our whole family was devastated.  All Gold Star families feel that way.”

Gurbisz also praised the memorial’s creator, Brian Hanlon of Hanlon Sculpture Studio in Toms River. “We didn’t even have a concept {when the project began}. He’s doing a tremendous job,” he said.

Hanlon’s memorial features sculptured figures seated on a bench, looking out to a monument, which is topped by a five-sided bronze cap. Each of the five sides contains 10 stars, with the five sides representing the five points of a Gold Star. The total of fifty stars represents each of the fifty states.

The final cost, according to Gurbisz, is “in the ballpark” of $200,000, which is being paid for by cash donations and pledges.
The former Vietnam veteran said there are U.S. military personnel serving in some 70 countries around the world who put their lives on the line for us every day. ”They’re all related to someone, and their families worry about them,” said Gurbisz.

“You’ve been through the peak of sorrow, and we want families to have a place to have peace.”

“It’s a place to be peaceful and contemplative.”

Donations are still being accepted. For information on making a contribution, you can go to www.njgoldstarfamilymonument.org.