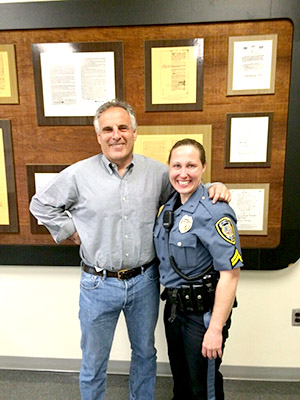 Long Branch Mayor Adam Schneider (left) and Mayor’s Award recipient and Long Branch Police Officer Heather Valdes (right). Mayor Schneider presented Valdes the award during the ShapingNJ5k in recognition of the health transformation that she had made in her life and is now working to make in the lives of others.

Long Branch — During the awards ceremony of the ShapingNJ5k race April 27, Long Branch Mayor Adam Schneider presented Long Branch Police Officer Heather Valdes with the Mayor’s Award, to recognize her transformative changes and her work to improve the fitness of others.

Long Branch Mayor Adam Schneider (left) and Mayor’s Award recipient and Long Branch Police Officer Heather Valdes (right). Mayor Schneider presented Valdes the award during the ShapingNJ5k in recognition of the health transformation that she had made in her life and is now working to make in the lives of others.

Valdes, a lifelong Long Branch native and police officer for the past 17 years, underwent a complete lifestyle shift to improve her life and the lives of others around her.
According to Valdes, she was unhappy with her fitness ability and therefore felt that she was unable to adequately perform her job as an officer.

“I was not doing anyone any favors by being out of shape,” she said.
After recognizing that she needed to make a change, Valdes began her journey.

She first started to run, then joined a gym, started to eat healthier meals – and before she knew it she was teaching others how to do the same.

“I pushed and pushed,” Valdes said, leading her to ultimately want to push and inspire others to do the same.
After months of hard work and dedication, Valdes was able to feel and look great. She is now teaching a Plyoga exercise class at

Gold’s Gym in Long Branch where she works with local residents who are experiencing the same doubts and dilemmas that many people face when trying to implement a healthier lifestyle.

Fortunately, Valdes says she is now able to use her experience as a motivator to improve the lives of others.

As a result of Valdes’ impact and achievement, Mayor Schneider presenter her with the award after she completed the ShapingNJ5k on the Long Branch Promenade on Saturday, April 25.

Schneider explained that the Mayor’s Award was created to inspire sedentary Long Branch residents to implement healthy lifestyle changes into their everyday lives.

The award was designed to shine light on average city residents who have taken steps to make positive lifestyle changes to improve their health and well being, he continued.

The award also supports the Mayor’s Health Initiative, to increase the overall health and vitality of the city’s residents while reducing healthcare costs.

In the future, Mayor Schneider will present the Mayor’s Award to other ShapingNJ5k participants based on their specific health journeys and the different ways that they have impacted the community.

“My journey is still continuing and I never want the adventure to end,” Valdes said.