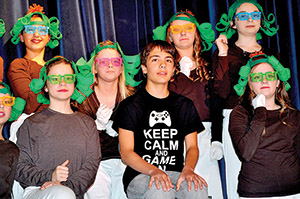 By Teja Anderson Thirty-two of MB School’s talented youngsters performed two sold-out shows of Roald Dahl’s Musical “Willy Wonka Jr.” based on his most famous work, “Charlie and the Chocolate Factory,” in the cafegymtorium last weekend.
Under the competent direction of teacher Meghan Vaccarelli with an assist from teacher Jamey Flaccavento and PTO Parent Rep Anita Macaluso, the kids sang, danced and acted their way through the play with nary a hitch, making the room of parents, grandparents, siblings, friends, teachers and other relatives proud as could be.

Willy Wonka, played by the vivacious Elizabeth Witek, served as both the play’s narrator and title character, with Steve Ostrom as the hero Charlie Bucket, a role that seems written just for him.

Jess Barton, Sophie George, Lily Gardner and Sally Carden were all standouts as the aforementioned kids’ parents, totally committing to their characters and their accents.

Supporting the leads were Erin McHeffey, Alyssa Costello and Jude Belas as Charlie’s other grandparents, providing even more laughs. Matt Berman and Hannah Zabe were adorable as Charlie’s friends. Jenna DiLorenzo had fun with her role as a news reporter and Belle Decker rocked as the Candy Man, a character not in the book but added to move the story along and add a little empathy for Charlie.

The musical numbers were often familiar and updated to include current hits like “Shake it Off” by Taylor Swift and “Uptown Funk” by Mark Ronson along with the wonderful Oompa-Loompa classic song and dance from the popular movie where the Oompa-Loompas dance and sing the naughty children off the stage.

A big shout out to Greg Zweemer for his sound production. It’s not an easy task to get everyone’s mics cued up and leveled. And to Carol Brady and all the parents who helped with the fabulous set decorations and props.

One of the smartest things that the administration does is to let the entire school attend the dress rehearsal for the first act a day before the play starts. This ensures that more kids not involved with the current play will want to be in future years once they are old enough and it also gives the performers a chance to be appreciated by their peers in a slightly less formal atmosphere. Getting up on a stage and doing your best takes guts and talent, and these kids all had the Golden Ticket!

MBBC Planting Fair
The Monmouth Beach Beautification Committee held its 2nd Annual Spring Planting Fair at the MB Cultural Center with a panel of speakers on hand to discuss to present topics of their expertise to assist locals and residents on the ongoing care and beautification of their properties.

First up was MB resident, interior and exterior designer, Nancy Bevacqui, on backyard gardening for the entire family. She was followed by Tom Vosk of Applefarm Landscape & Gardening who spoke on how to choose and care for native ornamental trees and provided great options for salt water and flood resistant species.

Gerald Molzon of Molzon Landscape Nursery Inc. then spoke on creative landscaping using organic fertilizers and the importance of using them to the environment. (Although he was unable to answer the question, do ladybugs bite? My research has shown it to be true, so yes Robin, Jerry is correct, the sweet little bugs do bite and many people in fact are allergic to them!)
John Doull from Dew Drop Lawn Sprinklers discussed why a sprinkler system is a valuable and important asset to your property and can actually save both money and water.

There was a brief intermission while guest snacked on cupcakes, cookies and cinnamon apples provided by the committee and took time to purchase tickets for the giveaway gardening themed baskets. The presentation continued with Todd Thompson of Guaranteed Plants and Florist. His topic: “Spring: it’s not just for pansies anymore.” He brought with him lots of colorful early spring/frost tolerant annuals and had them available for purchase at a very reasonable price afterwards.

Closing out the event was Leann Lavin of Duchess Designs, who presented her book “From Garden to Table” with a slide presentation.

Tom Vosk donated a four foot holly which he has already planted at the lucky winner’s home and seven lucky winners went home with the lovely baskets assembled and donated by the committee.
The event was dedicated to the newly departed and much missed committee member Pat Cahill, who made everything beautiful.

Plein Air
The Patricia Cahill Plein Air Memorial, Monmouth Beach through Artist’s Eyes, begins on May 9. Painting, art and photography is to be done by residents around MB, outdoors from May 9-17 of whatever catches their fancy. They will be observed and photographed at work and then their completed works will be hung May 18 and 19 at the Cultural Center with a reception and cocktail party on Friday May 22 from 5-7 p.m. compliments of Resources Real Estate in memory of their beloved agent Pat Cahill.
The art will stay up through June 6. To reserve your space contact JE Boehles at 732-222-5247 or [email protected]
* * *
You can always contact me with story questions or ideas at 917-797-1324 or email me at [email protected]