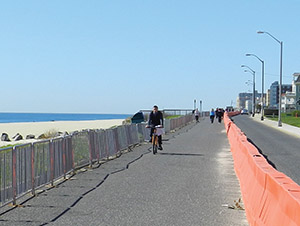 Long Branch has approved a $14.4 million bid to rebuild the destroyed boardwalk.

By Neil Schulman
Long Branch — The city has awarded a $14.4 million contract to George Harms Construction Co. to rebuild the boardwalk from Brighton Avenue to Morris Avenue. Officials said work is expected to start in June, and be “substantially complete” by Memorial Day of 2016.

Long Branch has approved a $14.4 million bid to rebuild the destroyed boardwalk.

At the April 28 City Council meeting, City Engineer Gerry Freda said that the city had received a lot of interest in the project, with 25 companies asking for specifications on the project, and 15 submitting bids.

The project encompasses a lot of different elements. It includes work on repairing and strengthening the bluffs, building a widened boardwalk (16 feet wide from Brighton to South Bath aves., then expanding to 20 feet wide up to Morris), and three pavillions with restrooms. At least two of those pavillions will also have concession stands; it’s possible the one at Cottage Avenue will instead be used for that too, or for equipment storage or some other function.
There will be 10 access points to the beach along the boardwalk, including at least four which are handicap accessible at the West

End, Cottage Place, North Bath and Pavillion entrances. There will be 63 or 64 lights, similar to what are at Pier Village except that they will use more energy efficient LED bulbs.

The railing along the boards will be the same as Pier Village.

The pavilions will be 15 feet high, the maximum allowed by FEMA, which is picking up 90 percent of the cost, since this is a project to replace a boardwalk lost to Superstorm Sandy.

“FEMA will only pay to replace what is lost,” Freda said. “They will not pay for betterment.”

That’s one of the reasons that this project has been a long time in planning. Shortly before the hurricane hit, Long Branch had made plans to widen the boardwalk from its 10-foot width to the new proposed size. Long Branch will be paying for the expanded portion, as officials said it didn’t make sense to rebuild the boardwalk as it was and then redo it all over again.

In addition to the boardwalk itself, work must be done on the bluffs beneath it. Freda said that while the stone wall there did an important job of protecting Long Branch from even worse damage during Sandy, it doesn’t meet modern building codes. For one thing, the wall starts at ground level.

Instead, steel sheets will be driven into the earth below the boardwalk. “Some of these sheets are 40 feet deep,” Freda said.

It’s possible that a little of the steel will be visible from the sea wall, but most of it will be covered by sand and vegetation, and it will not be visible at all from the boardwalk, he said.

“That wall is really what made the whole project work.”

Freda said that each bid had its own strengths and prices, but Harms was the overall lowest. He believes it may be because of the types of projects the company usually works on, major road projects and bridges. That gives them a lot of experience with driving pilings and some of the other elements as “right in his wheelhouse.”

He said that others with different specialties, may have had cheaper bids for other parts of the project, such as the pavilions, but Harms’ was the lowest overall.

Freda said that his firm reviewed the specifications line by line, and the city’s law firm has reviewed the wording of the contract.

The next phase is to have a pre-construction meeting, determining where the company wants to begin work and other details.
Work is expected to begin June 1.

While the work is going on, the company will leave the stairs and access points up as long as possible, to let people get onto the beach.

The work on the boardwalk is expected to be completed by Memorial Day of next year. Work on the pavilions is supposed to be finished by July 2016, and remaining details are supposed to be closed out by sometime that autumn.

George Harms Construction is planning to work year-round, though a winter like we had this year could cause delays.