Congregation Torat El one of 30 synagogues to eliminate dues 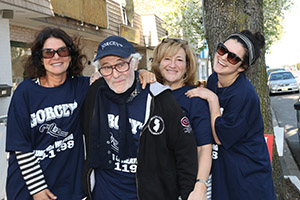 Long Branch — After more than eight decades in the plumbing industry, Ben Gorcey has announced that he is “semi-retiring.”
Gorcey, of Gorcey’s Plumbing & Heating, now 89, says he started working as an apprentice to his father when he was six years old, and he’s been in the plumbing business close to 84 years now.

Gorcey Plumbing is partnering with Apollo’s, out of Keyport. Ben will be staying on as an advisor for the company, and the business’s phone number, 732-229-6743, is staying the same.

Gorcey has traveled the world, visiting China, India, Central America, Egypt and many other countries. But he’s made Long Branch his home.

His daughter Michele has been in the area recently helping him get ready to make the transition.
Even if he’s slowing down in the plumbing business, Ben is staying active. He says he’ll be focusing on managing his real estate holdings.