Rally for peace in Long Branch 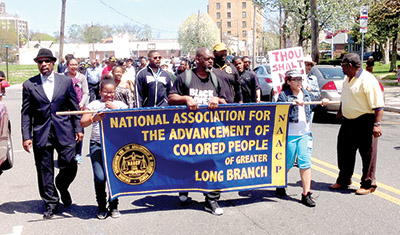 By Neil Schulman
Long Branch — Area churches, community leaders and politicians joined in a Rally and March for Change on Sunday, in response to the tragic events around the country, most recently in Baltimore. 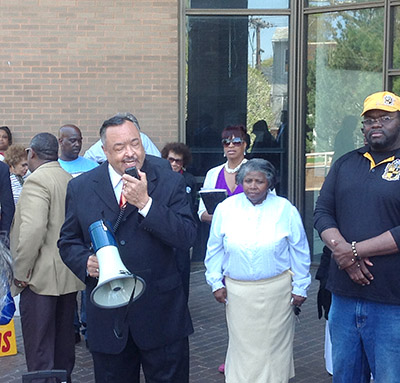 Rev. Aaron Gibson and Elder Caroline Bennett from the urban ministerial alliance bring a message of support and prayer for those across the country who have lost their family members to violence.

Lorenzo “Bill” Dangler, head of the Greater Long Branch NAACP, said that despite being put together quickly, 150 people showed up for the rally, which started at Jerry Morgan Park and made its way down to City Hall.
The rally was due to “the rash of black men being shot at the hands of police,” Dangler said.
It was a peaceful march. Dangler said he cannot condone the violence, though “we certainly understand what’s going on in Baltimore.” 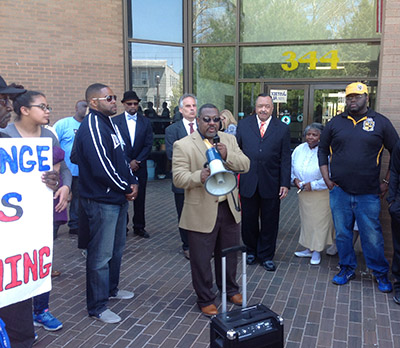 Jungrea Chung. All remarks were brief, Gibson said.
“It didn’t last long, as for us the speeches were not the point,” Dangler said.
“It was a good, peaceful time,” Dangler said. “It wasn’t to antagonize anyone.”
While the death of Freddie Gray in Maryland while in police custody is the latest incident, it’s not the only one. The rally noted that there have been cases in Ferguson Missouri; Bridgeton, New Jersey; Charleston, North Carolina; and New York City, to name a few.
Dangler said that there’s now a lack of faith in the system. When you ask people about these incidents “the overwhelming response is the police will get away with it again.”

The local NAACP is working to ensure that a similar situation won’t happen here. It’s trying to make sure that relationships between the police and community are friendly.

“We have a much better dialog than we had in years,” Dangler said.
In March, the NAACP held a police forum in the Long Branch High School, with heads of departments from Long Branch, Asbury Park, Tinton Falls, Red Bank and Fair Haven. Lt. Governor Kim Guadagno also attended.

At the end, both sides were pleased with the results, Dangler said. Discussions that day included questions about the use of video cameras, and procedures that departments follow when excessive force is reported.

That talk was taped, and copies have been distributed to the participating communities. Dangler hopes to see them played on local cable channels.

Officials understand the importance of communication, he said, as shown by who showed up for the March program. 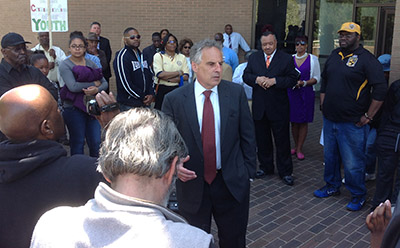 “The Lieutenant Governor, Saturday morning, came and lent her support,” he said.
Dangler said that they’re not only reaching out to officials though. After Sunday’s rally, some young men on Broadway asked if they could speak privately, with no officials around.

“We’ll reach out,” Dangler said, saying the NAACP would see if a local church will provide some space for the meeting. “Come together and sit and talk. I have no problem with that.”