How a cat from WLB raced into the world’s heart

Fishing, camp and concerts in WLB this summer 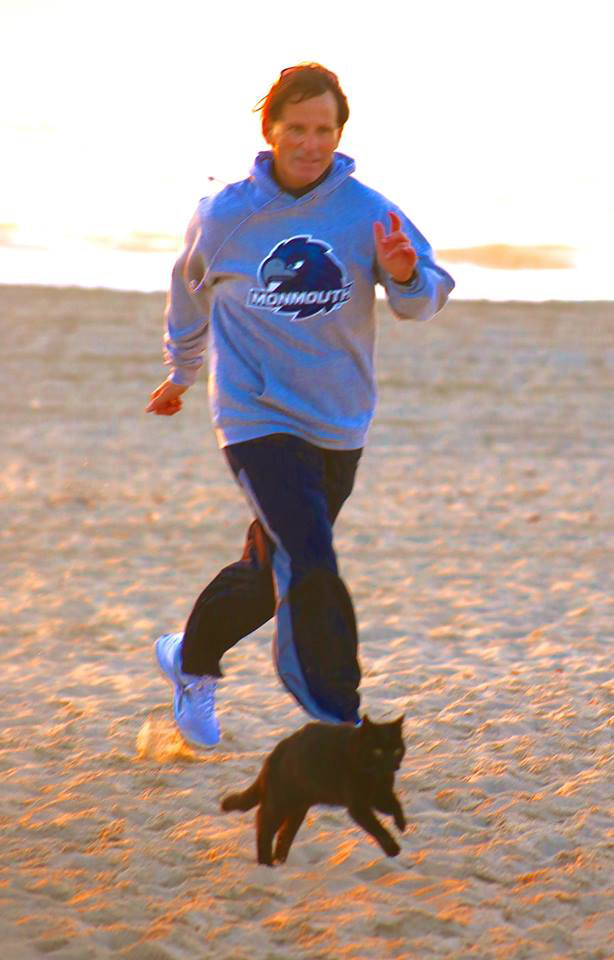 When Optimum Online wanted a commercial that showcased how fast their service is, they chose a young lady from West Long Branch known around the world for her long distance running. A young lady with four legs and black fur — Roadrunner the cat. 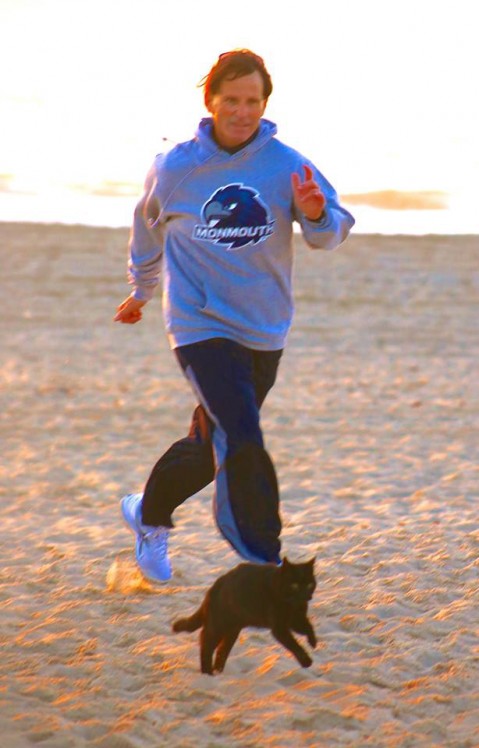 Greenblatt first met her in 2008, as a stray kitten. Greenblatt, a celebrity fitness trainer, was going for a jog when he first saw the cat near his West Long Branch home.

“I noticed a beautiful shining black kitten with big eyes staring at me,” he said. Greenblatt’s

neighbors told him the cat was a stray, found in a shoebox.

“The next morning when I went for my run, she was on my doorstep,” he said.

And he realized the cat was going with him. This was a kitten who liked long distance running. Nowadays she leads when they go.

“Dogs do it… cats don’t run with humans.”

Greenblatt took the cat in. Because of her unusual habit of running on the streets, he called her Roadrunner.

(Roadrunner’s lawyer — yes, she has her own lawyer, as well as an accountant and literary agent — says that this is a fine name for a cat, and that there’s no risk of her being mistaken for the Warner Brothers character since they’re different species.)

Greenblatt started taking her with him wherever he ran, including the Long Branch beach and boardwalks. On rainy days, Roadrunner has an indoor course.

That might have just been an interesting anecdote, except that her story went viral in 2010. His cousin Marni Gandel was working at Langosta Lounge in Asbury Park, and told the story to a producer for Cablevision, Brian Johnston. He wanted to film the cat.

At first, Greenblatt wasn’t interested, feeling he didn’t need the publicity. He’s trained actresses such as Susan Lucci and Rhea Pearlman, and athletes such as Christie Rampone, Captain of the U.S. Women’s National Soccer. He also wasn’t sure how the cat would react.

But eventually he was persuaded, and film crews came and filmed her over the course of two days.

“She put on a show for the cameras,” he recalled.

When the video hit the internet, things got crazy, with Cablevision’s video seen by hundreds of thousands of people. People loved watching the running cat.

Later that year, a children’s book author contacted him, saying they should make her story into a book. (That’s why Roadrunner has a literary agent.)

On March 1, 2011, Roadrunner was one of the biggest stories in the world. AOL’s top news stories for the day included a piece on the cat, along with what Barack Obama was doing.

Greenblatt says people all over the world have written about her.

One day, Greenblatt noticed that Roadrunner’s Facebook page was being inundated with messages in Chinese. It turned out a magazine in Taiwan had written about her, attracting international attention.

He collects all mentions of her on the web; many of the sites he’s never heard of. Quite a few of them are animal rescue organizations, using her as an inspiring story of rescue animals.

Greenblatt said that when the children’s book gets published, part of the proceeds will go to animal rescue groups.

Roadrunner also travels a lot. In Sept. 2012, Monmouth Park honored her with a race named after her.

Greenblatt said that to get her acclimated to racing, he took her to the track a couple of times and played clips of famous horse races so she would get used to the crowds. He was worried she might be skittish on race day, and asked for a chair for the winner’s circle when the emcee “interviewed” her.

It wasn’t necessary; she walked around the track with complete confidence that day.

The winning jockey for that race was Chris DeCarlo, a friend and client of Greenblatt’s. 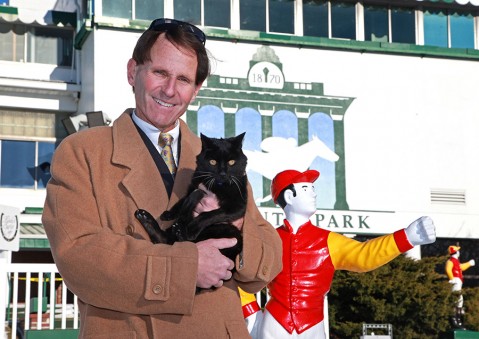 “That made it even more special. I had one of my best friends in the winner’s circle and I had my kitty cat,” Greenblatt said.

Roadrunner has a commercial career too. Earlier this month, she was in New York, filming for Optimum Online. That’s just the latest venture. When Justin Sallusto, owner of Kingdon Nutrition, wanted to expand his line of animal health supplements from horses to housepets, he got Roadrunner as a mascot, since she obviously loves keeping fit.

But to Greenblatt, that’s not all that makes her special. He grew up with black cats in the house. since his mother loved them. When he finally decided to adopt Roadrunner and took her to the Monmouth County SPCA for medical inspection, they estimated she had been born on April 30, 2008.

“My mother passed away on April 30. Nobody loved black cats more than my mom,” Greenblatt said. “Roadrunner’s birthday cheers up the saddest day of the year.”

You can learn more about her at www.roadrunnerthecat.com, or on her Facebook page, RoadRunner-the-Cat.