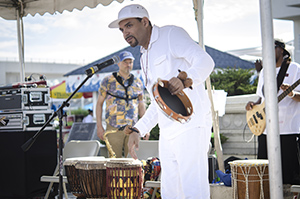 Long Branch — On July 4, ZEYBRAH staged a most successful 22nd Oceans of Rhythm Festival. A light misty rain came to a halt shortly before the opening ceremony. As the music started, the clouds cleared and the sun came out, blessing Oceans of Rhythm with a glorious rest of the day on the Long Branch boardwalk.
A steady stream of ethnically diverse people strolled by, and stopped to enjoy the catchy and motivating rhythms that emanated from the stage.

Many participants joined in, as  master dancer/drummer Lamine Thiam enticed them to the stage area to learn some dance moves straight from Africa.

The first set was a musical selection featuring Timmy Douglas from Belmar on bass and David Hollander from Red Bank on tenor sax. Vocalist Fashina Alade from Matawan mesmerized the crowd with her rendition of the classic Brazilian hit, “Girl from Impanema.” As she sang the lyrics…”as each one passes by,” the typical stream of passersby stopped to listen to and enjoy the music — or at least to pass by with a bit more of a sway to the samba.

Another favorite theme song from Brazil, Black Orpheus, featured an introduction on the berimbau (an African/ Brazilian stringed instrument that resembles a bow and arrow). While master percussionist Umara wailed on the Brazilian instruments and sang in Portuguese, some of Long Branch’s capoeiristas (capoeira dancers) surfaced from the crowd, executing dexterous movements to the rhythms, amazing the audience with their fanciful leaps and jumps.

A highlight of the afternoon was ZEYBRHAH’s tribute number to the nine victims of the recent Charleston Massacre, Gimme Shelter, sung by Fashina Alade.  This version of the Rolling Stones song was re-arranged by world music’s superstar, (Benin born) Angelique Kidjo. Coincidently, one of her former drummers was actually playing in the number — Thojo Dienne from Senegal, master drummer with Yakar Roots.

The next set focused on hard core samba, featuring a group of samba specialists: Mzume from, Long Branch; Fitz Morris from Kingston, NY and Umara Naves, a life-long resident of Harlem of Brazilian heritage. Once again the audience joined in the rocking groove with dancing and clapping.

To conclude the event, the enticing and exciting African rhythms resounded up and down the boardwalk and beach as the Senegalese African drumming and dance took over. People gathered around and enthusiastically joined in. Soon the African stiltwalker came out, towering above the crowd (and adding another rich cultural and symbolic expression).

For the finale, the musicians and dancers lead music and dance procession along the boardwalk engaging an even larger crowd of July 4th holiday celebrants.
All photos by Danni Siminerio