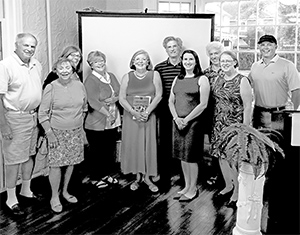 Van Anda’s book, published by Arcadia Publishing, contains more than 150 photos as well as numerous stories about the people who have left their mark on Rumson, both living and from the past. During the lecture, Van Anda gave an insight into the life of Lillie Bliss, the daughter of the former Secretary of the Interior under President McKinley, and how her collection formed the foundation for the Museum of Modern Art.

As former editor of the Rumson Borough bulletin, and both a teacher and past member of the Board of Education on both the elementary and regional high school boards, Van Anda has been a borough resident since childhood and has always been fascinated by the people who made the community so special.

Association president Bricker, in expressing thanks for the presentation, also noted the Historical Association has a number of other programs on its immediate agenda, including a reading of the Declaration of independence at the Allen House, 400 Sycamore Ave., Shrewsbury, at 10 a.m. Saturday, July 4, and the ongoing and highly popular Spirituals to Soul exhibit, the story in visual and audio presentations of the African American musical heritage in Monmouth county in the 19th and 20th centuries at the museum and headquarters, 60 Court St., Freehold.

Monmouth County Historical Association is a private non-profit organization that has been working to preserve history and provide educational opportunities since its founding in 1898. The Historical Association’s Museum and Library is located at 70 Court Street in Freehold. Museum hours are: Tuesdays-Saturdays 10 a.m. to 4 p.m. The Library is open Wednesdays through Saturdays. The Historic Houses are open Fridays, Saturdays and Sundays, from May 1 through September 30, 1 p.m. to 4 p.m. For further information about the Association, please call (732) 462-1466 or visit the web site at www.monmouthhistory.org