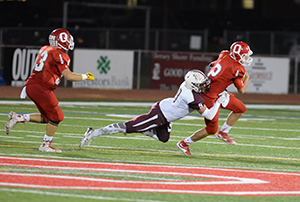 Making a diving tackle and getting a sack for Red Bank Regional is Sean Naiman (9) a senior. Kenny Pickett (2) is the junior quarterback at Ocean trying to escape the reach of Naiman.

By Walter J. O’Neill, Jr
Friday night the Bucs of Red Bank Regional demonstrated that the football team of years past is back. With new uniforms that reflect old school traditions RBR visited the Spartans of Ocean Township in a Class B North match-up.

Making a diving tackle and getting a sack for Red Bank Regional is Sean Naiman (9) a senior. Kenny Pickett (2) is the junior quarterback at Ocean trying to escape the reach of Naiman.

Both schools entered the game undefeated at 2-0, and for the Bucs that was the best start they have had in ten years. Red Bank Regional went into the game with a tough defense while the host Spartans had one of the hottest offensive units in the Shore Conference.

Two years ago Red Bank Regional had a 1-9 season and last year finished at .500 with a 5-5 record. Head coach Nick Giglio said this this summer was the best training camp he has had in seven years at the high school.

Ocean had a 5-6 record last season but finished strong knocking off the top seed in the NJSIAA Central Jersey Group III playoffs in the opening round. They lost in the semifinals. However, this year starting quarterback Kenny Pickett has more confidence and strength while future NFL prospect Tyler Thompson has returned after suffering a broken leg last year.

Red Bank Regional scored the first of their game-high 16 points with 1:50 left in the first quarter. It was a 32-yard field goal by Jack O’Connor, senior. The entire second quarter was a defensive war waged by both teams. The game was played between the 30-yard lines and neither squad was able to score. RBR took a 3-0 lead with the field goal going into the halftime break.

In the third quarter with only 10 seconds left to play the Bucs were deep in their own end of the field facing a second and seven at their own 12-yard line. Jack Navitsky, senior quarterback for Red Bank Regional, dropped back in the pocket and fired a perfect pass to fellow senior Matt Reardon, who ran 88 yards along the Ocean sideline for the touchdown. Ocean blocked the extra point attempt, but the Bucs were up 9-0 going into the fourth quarter.

With 10:11 left to play the Spartans fumbled and RBR jumior Chris Outerbridge picked up the ball and returned it 28 yards for the touchdown. The extra point by O’Connor was perfect and the Bucs had a 16-0 lead on the shocked Spartans.

Ocean finally crossed the goal line late in the fourth quarter with a seven-yard pass from Pickett to senior Quadratullah Oadiri. The Spartans attempted a two-point conversion but the pass attempt failed.

The stats were very close for both teams, except the Bucs finished with a 16-6 victory. Red Bank Regional had 68-rushing yards with Alim Godsey getting 24. Passing, Navistsky completed seven of nine for 188 yards with senior  Sadiq Palmer getting 85 of those yards.With the victory the Bucs of Red Bank Regional are 3-0 and showing the division that they are back.

Ocean finished with 73-rushing yards on 29 touches. Thompson had 17 carries for 64 yards, the first time in three games he has not rushed for 200 yards. Pickett completed 19 of 28 attempts with no interceptions for 184 yards. Greyson Stoothoff, senior, had 38 yards on five catches. Ruquan Dean had two receptions for 21 yards and Oadiri had three catches for 30 yards and one touchdown. 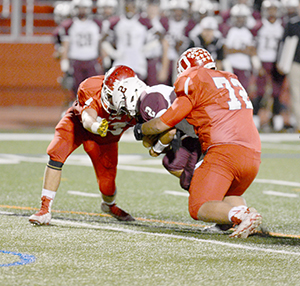