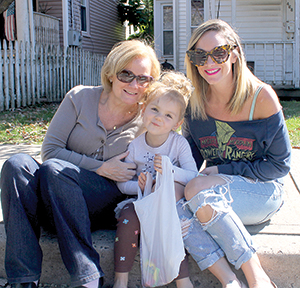 By Patty Booth O’Neill
Long Branch — The annual Columbus Day Parade, which first debuted in 1946, took place in the city on Sunday.

Parade chairman and organizer Joseph Mercadante did another great job.

Floats, marchers, politicians, bands and performers representing all ethnic groups, not just Italiana, amassed at the Middle School to begin their trek at 1pm. While they were preparing, the route — which went up Bath Ave., turned left onto Broadway, then turned right onto Morris, ending at Morris Ave. School — was already lined with onlookers excited to see the sights that would pass. The younger members of the crowd came equipped with bags to catch candy which people in the parade often throw. The candy makes everyone happy.

Local high school bands were from Long Branch, Shore Regional, Monmouth Regional and Ocean Township. There were many other bands such as a barbershop quartet, Mariachi band, bagpippers and much more.

The name of each group in the parade was announced as they passed by the grandstand set up at Morris Avenue School.