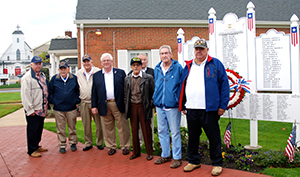 By Teja Anderson – Although the ground was a little damp from the night before, the sun shone down on our veterans as they gathered by the Honor Roll in front of the Wells Fargo bank on Beach Road early Wednesday morning to place the commemorative wreath.

From there they either walked or drove to the MB School for the special and highly anticipated presentation.

Although many students throughout the country have Veterans Day off, Superintendent Michael Ettore and Mayor Sue Howard have agreed over the years that by keeping the kids in school and holding an assembly with a guest speaker, the color guard and town veterans in attendance, students will learn more about this important day, and take away something other than just getting a day off from school.

After Mr. Ettore introduced the mayor, she welcomed the honored guests seated beside her in the front of the room. The school’s chorus and band were on the stage behind her, and the entire school was seated before her on the gymnasium floor.

Every year the middle school students take part in an essay contest about why Veterans Day is important and should continue to be celebrated in this country. This year’s winners were Sydney Riepl and Pari Walter, who took turns reading their essays aloud to the attentive audience.

Both young women did an excellent job and hammered home the importance of thanking any and all veterans from all wars for their service and for protecting our freedom and rights. Then the band played Michael Story’s Patriotic Bits & Pieces and the chorus sang The Brave by John Riggio.

Mayor Sue Howard introduced the highlight of the event, guest speaker Sgt. Major Lance Harrell a US Marine, Inspector Instructor of Combat Logistics for Battalion 25. Sgt. Maj. Harrell, a father of two (his wife Felicia was in attendance), is originally from California and enlisted in the Marines in the 1990s. During his 24 years in service to our great country, he has been deployed to Kuwait, Iraq (twice), Korea, and has been stationed in Japan, earning an impressive number of gold stars and medals.

In his speech, Sgt. Maj. Harrell told his captivated audience that it was not just the veterans themselves that sacrificed their lives for our country, but their families as well. He averred that not only the parents and spouses of those who serve are affected, but most especially their children, who are forced to move countless times, changing schools, having to make new friends and readjust their lives because of their parent’s choice of career.

Whether speaking from his own experience or others he allowed that, “having your teenager say ‘I hate the Marines because they always take you away’ is a tough thing for a parent to hear.”

This really hit home for a lot of the kids listening intently, because most of them love living here in MB and couldn’t imagine being dragged away and having to create a new life somewhere else leaving their friends, teachers, sports teams and grandparents behind.
When he was finished speaking, seventh grader Steve Ostrom played Taps on his trumpet — never easy but he mastered it — and the Mayor and Mr. Ettore thanked the kids for being such a well-behaved and respectful audience.

After almost ten minutes of technical difficulties, the short film “I Fought for You” was shown to the students. If you haven’t seen this four-minute tear jerker you need to. You can watch it on YouTube, just search “Veterans Day, I fought for you.”

Needless to say the message is clear; we all owe these men and women who sacrificed so much for our country our utmost respect. At the end of the film most of the older kids were standing and saluting the veterans in front of them and soon the younger kids, with a little prompting from Mr. Ettore and their teachers, did as well.

After the children went back to their classrooms the veterans were all invited with their spouses to Michael Angelo’s in town for lunch as guests of the Borough.