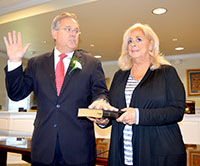 West Long Branch held their New Years Day swearing reorganization ceremony at City Hall on Friday afternoon. The meeting opened with a Pledge of Allegiance, a prayer and then right down to business.

Susan Juliano and John Penta were sworn in as new members of City Council. Penta, filling in upon Barbara Ruane’s retirement, will serve for three years. Mayor Janet Tucci lauded Penta’s business acumen as being an excellent resource for the Boro. Newly elected Juliano is a life-long resident of West Long Branch. “Susan brings her love and dedication for West Long Branch to the council. I know that she will serve this Boro well like both her parents did,” Tucci said.

“I would like to begin the New Year by offering a heartfelt thank you to retiring councilmembers Barbara Ruane and Steven Cioffi,” Tucci said, speaking to the audience. She said that the two members served the Boro with dignity, dedication, loyalty and hard work.

During her ten years on council Barbara initiated the “Wall of Honor” to honor all residents who have served in the Armed Forces. “She initiated and trained a Community Emergency Response Team for our Boro, with the assistance of Councilman Fred Miglaiccio,” Tucci said. She also served as Chairwoman of the Centennial Celebration.

Steve Cioffi has dedicated nine years of service to the Boro. “Steve has worked closely with our Environmental, Shade Tree and Recreation Commissions overseeing the dredge of Franklin Lake as well as the installation of new lighting around the perimeter,” Tucci said. She went on to say that Steve chaired the Public Works Committee and always volunteered during national and local emergencies.

Also swearing in were members of WLB First Aid and Fire Department.

Tucci thanked the council and then the Recreation Commission under the leadership of Joseph DeLeonardo. “He continues to amaze me,” Tucci said. She went on to say how impressed she was with the Fall Festival and Christmas Sing. “And our 4th of July fireworks were funded primarily through the generosity of our residents so that minimum tax dollars were used, she said.

Tucci spoke about upcoming projects in town; paving roads, equal tax assessment, and making the decision on whether or not to make police dispatch part of the county system. She also spoke about unfortunate incidents in the town such as the Carriage Square fire and an accident on Monmouth Road that took the life of a pedestrian.

Another injury happened to Police Sergeant Brain Kramer, who was struck by a vehicle while on traffic duty. “We are all very thankful that he continues to improve each day,” said Tucci.

Tucci then extended a heart-felt thank you to Larry Mihlon who has one more month to serve as Police Chief. “On behalf of the residents of West Long Branch we thank you for protecting our Boro with exceptional leadership, dedication loyalty and commitment. You have served our community well with dignity and pride — Well done Chief Mihlon!”

“My ultimate mission as your mayor is to keep West Long Branch a great place to live and raise a family I promise to continue the same readily accessible, problem solving and responsive approach as your mayor. May each of you have a wonderful New Year full of good health, happiness and peace,” she said.