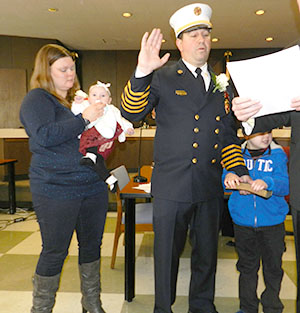 Ken Sneath is sworn in as Eatontown Fire Chief for 2016.

By Coleen Burnett
Eatontown — History was made in Eatontown on January 1, when running mates Anthony Talerico Jr. and Virginia East were sworn in as independent members of the Borough Council, the first time third party candidates have taken any seats there.
Talerico had previously served two other terms on the governing body as a Democrat, but decided to run as an independent in the November elections.

In their remarks after being sworn in, Talerico first paid tribute to Democrat Janet Kroposky, who served with him on the council but chose not to seek re-election, saying she will be “greatly missed.”

Turning to East, he smiled and said, “I wish this town a lot of luck, because you’re a ball of fire.”

East, who most recently has served on the Planning Board, said she was grateful for the town’s support  “I’m honored and privileged to be here today… I know we have a lot of challenges in 2016.

“I am grateful for this opportunity and will thoroughly enjoy my term in office.”
Mark Regan was sworn in as Council President. Using his characteristic humor, Regan said he was eager to get started. “It’s going to be a fun-filled year where we want to get things done. Let’s get this rolling,” he said.

In his annual Mayor’s Message, Dennis Connelly congratulated both Talerico and East for their dedication to the borough. Speaking to Talerico, Connelly said “You will continue to work hard for the citizens of Eatontown.”

Then, with a smile on his face, he remarked, “I do hope our disagreements will be few.”

Then Connelly congratulated the newcomer East. “I am looking forward to working with you on council,” he said, “Enjoy your day and enjoy your party.  I am sure you will make a nice addition to the council team.”

Connelly then focused the rest of his speech as an optimistic ‘Year In Review’ for the borough, touching on such topics as the development of Fort Monmouth, the ebola controversy on Fort property, the repeal of rent control, the debate over prevailing wage as it concerns Fort Monmouth, the borough’s presence on social media, and other topics.
Through it all, Connelly said he was happy to be at the helm, concluding his remarks by saying, “Thank you for allowing me to live my dream as mayor.”

For more on this story and more photos read this week’s LINK News.

Anthony Talerico Jr. and Virginia East were sworn in as independent members.

First Aid Captain Kris Killins is honored by Mayor Dennis Connelly for her 37 years of service to the Eatontown First Aid Squad.

Ken Sneath is sworn in as Eatontown Fire Chief for 2016.