Developer: mall must be ‘more than just a place to shop’ 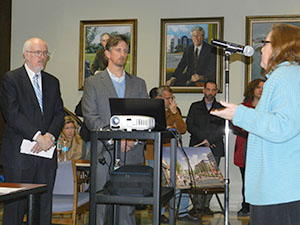 Patrick McNamara, an attoney representing Kushner Companies, and architect Robert Berry Jr. discuss their plans for transforming the Monmouth Mall into a “town center.” Many residents had questions and concerns at the hearing on the $500 million plan to transform Monmouth Mall.

By Coleen Burnett
Eatontown — A packed house came out to the Eatontown Borough Council workshop meeting on February 10. Residents wanted to hear the latest plans for the total makeover of Monmouth Mall.  And by the looks of it, opinions are divided.

Patrick McNamara, an attoney representing Kushner Companies, and architect Robert Berry Jr. discuss their plans for transforming the Monmouth Mall into a “town center.” Many residents had questions and concerns at the hearing on the $500 million plan to transform Monmouth Mall. 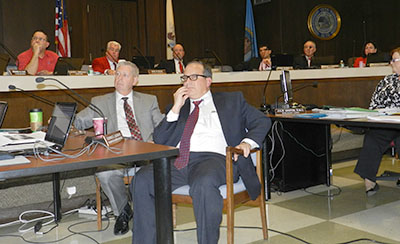 The governing body and borough officials listen to the presentation.

The plans presented by the Mall’s owner, Kushner Companies of New York City, will make for a mixture of open-air and enclosed retail shopping areas, dining areas, and an outdoor space for entertainment – think bringing in concerts.

There will also be one- and two-bedroom apartments available for rent (not purchase), an outdoor plaza, green spaces and a streetscape.

To do this, there would be a renovation of the ground level of space between Macy’s and Boscov’s — and converting what is currently JC Penney, the mall’s food court and adjacent retail space into the outdoor plazas.

The additional commercial and residential buildings, which could be four to five stories tall, would be built in the current parking lot area between the movie theatre, JC Penney, and Boscov’s. The cost of the project is estimated at $500 million.

In his introductory remarks, Patrick McNamara, a partner with the law firm Scarinci Hollenbeck of Ocean Township, and representing Kushner Companies at the meeting, said retail shopping as most know it has changed with the advent of the internet and online shopping.

“We’re now in an era of Amazon and Google,” he said. “We’re in an era where shopping malls need to be more than just a place to shop, take a stroll or enjoy getting out. They need to become a destination point — something that is more integrated with their communities. They need to be something far greater and much more diverse than they’ve been over the last 30 to 40 years.”

Robert B. Berry Jr., vice president of the Washington, D.C.-based architectural firm Callison RTKL, said “We want to build a community. The introduction of residential and pedestrian friendly activity really fosters that sense of community. We also want to incorporate ‘live, shop and play’ elements and make sure they’re highly integrated with indoor and outdoor activities.”

“All of that together will reinvent the visitor experience, not making it just a repolished mall, but a repurposed mall – a repurposed town center that becomes a 24/7 activated space.”

The Mall would also get a new name — Monmouth Town Center. The area originally opened as the Monmouth Shopping Center in 1960.
The concept that is envisioned for the Mall is not new. Similar shopping areas have been built in such diverse areas as Cincinnati, Ohio, Fairfax, Va., and San Jose Calif. But the new project would be the first in New Jersey.

Mayor Dennis Connelly cautioned residents that the presentation was only a preliminary idea and there was a long way to go before the project is shovel-ready.
“This is a conceptual plan”, he told the audience. “Try to be open minded and know this is not set in stone.”

When the two men finished their presentation, the public spoke out. Some, recognizing the change in millennial’s shopping habits, were all for it. “I think it can be nothing but good for the town,” said Eatontown resident Sharon Lundy.

Others were more skeptical. “What you’re bringing into this area is a city environment,” said Eatontown resident Richard Jacobs. “You are bringing the city to the suburbs… I understand why you’re doing it, but I’m not sure that it’s right for us in this town.”
Sophia Domogala, a resident of Todd Street, also raised environmental concerns.

“I am terribly concerned about this situation,” Domogala said “I do think our community deserves an upgrade at the mall, I’m all in favorite of that. However, I do think this is too extreme for our community to handle.”

Other concerns by residents included an increase in traffic and also the effect the expansion would have on the borough‘s school system.

There is no timetable for construction and the representatives from Kushner admitted that the project is at the very beginning of what they called a “multi-year “ process of exploration. The Eatontown council would have to make changes to its land-use ordinance first, and then the Planning Board would have to vote on the project. Both Monmouth County and the state

Department of Transportation would also have to sign off on it, as the mall is surrounded by streets they control, Wyckoff Road and also Route 35 and Route 36.
At the workshop’s conclusion, Connelly was pleased. “We will be having further meetings,” he said to the crowd as they began to file out. “I hope you got everything you needed out of this.”