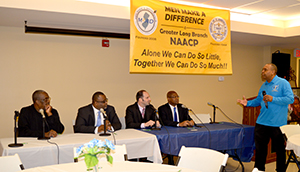 They Traveled from North, South, and Central New Jersey, New York, Pennsylvania and of course Long Branch. There were Christians, Muslims, Jews and the non-religious. Fathers with their sons and daughters, Mentors with their mentees.

Over 100 individuals all there in support of each other, seeking and giving guidance at the Men Make A Difference (M2AD) and the Greater Long Branch NAACP Quarterly Fellowship Breakfast held at the Second Baptist Church Conference Center in Long Branch on March 19th.

Bill Dangler, President of the Greater Long Branch NAACP welcomed the attendees to the 3-hour gathering. “This is movement,” said Dangler. “We are putting down our egos and challenging all men to become the priests, providers, and protectors of their families, their communities, and their personal development.”

The event consisted of youngsters who were in attendance having breakfast with their dads or mentors. Upon the conclusion of breakfast, the men, boys and girls were separated into three different areas.

Twenty-six-year-old Orlando Vick, who recently released his new Gospel single “Nothing Like You,” said he remembers attending many of the M2AD events in West Orange when he was in his teens.

Vick performed his song as well as helped lead the conversation with the boys.

The men’s session consisted of four panelists who answered and asked questions. Each telling a short story as a way of introduction.

“Fabulous” Fabian Howe asked the men how many sides does a coin have? “Three,” he told them. “Your side, your kids side and the truth.” He talked about how his dad didn’t spend time with him growing up and he knew he wasn’t going to follow that example. “I spend time with my kids and I love it,” he said.

Author Elmer McBurrows is Retired, E. I. DuPont, United States Army who served in Vietnam. “We will all be as one,” he told the crowd of men and their mentees. “If your situation changes your praise, then your praise should change your situation. You still have a life to live.”

Dr. Lamont Repollet, Superintendent Asbury Park School District, told his story of having two dads growing up and loving them both,” he said. “My strategy is to make you a great parent. If you are already a great parent, then be a super parent.” He went on to say that he wanted his kids to be proud of him. “You don’t have to have money to be a great dad!”

Dr. Michael Salvatore, Superintendent Long Branch School District, quoted 2 Corinthians speaking about thorns in the flesh and suffering. “I see this as strength,” he said relating it to turning a bad situation around.

“Men Make A Difference is not some type of exclusive group,” said John Blanton a native of Long Branch, who resides in West Orange and oversees the operations of Men Make A Difference. “We meet any man where he is as long as he is willing to make a difference by bringing about positive change in his Family, Community and Own life.”

Greg Gibadlo of Middletown who attended the event said getting men together in this fashion should be widely covered in the press and other media sources. “The heartfelt expressions of the panelists truly reached me.”

Rev. Aaron Gibson, Pastor of Second Baptist Church, who also participated in the dialogue and offered words of encouragement, said the day made him think of his own dad and family. “We have to find a way to bring the Men Make A Difference event to more people. It was certainly a dynamic and inspirational day.”
For more information on Men Make A Difference, log onto mmd.jgbventures.net or call 973-324-0578.

The girls also had their own special group time.

After listening to initial speakers, the boys went to a separate room for more leadership.