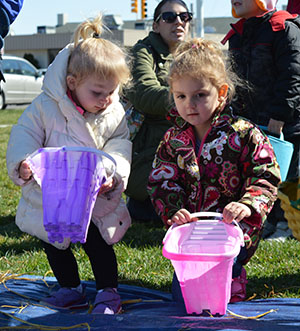 By Patty Booth O’Neill
It was called off last weekend due to rain, but the egg hunt sponsored by Seashore Day Camp and School and the Greater Long Branch Chamber of Commerce proceeded without a hitch on Saturday. It was still a little chilly but that didn’t stop the excited kiddies from their favorite egg hunt of the season.
“We had a really good turnout,” said Seashore Director John Villapiano. “Hundreds of kids showed up today and their parents.”
The procedure went off like clockwork as kids excitedly watched from the perimeter — spread the hay, toss bags of candy eggs into the air, rake a little more to make sure they’re not too easy to find, and then the buzzer. “Don’t forget to look for the golden egg for a special prize,” Coach John yelled out just before into his bullhorn just before giving the go-ahead.

The first to wander in were the toddlers who seemed more interested in gathering interesting bits of hay than eggs. Excited parents were allowed in with that age group so the eggs did get collected.

After that the process started all over again for the next group (no parents allowed) — spread the hay, toss the eggs — the older kids watching like hawks from their vantage point to see where the golden egg ends up. But sometimes it’s hidden so well, no one can find it, to the excitement of the next group who gets to hunt for two.

Off to one side of the park is a truck loaded with prizes of chocolate bunnies to be given out to whoever finds the most eggs and the coveted golden egg in each age group. Helping with prizes were Nancy Kleiberg, Sharon Villapiano, and Dana Kawut, event coordinator for Long Branch.

“This is a great turnout,” said Nancy Kleiberg, Executive Directer of the Chamber of Commerce, who was in charge of handing out the prizes. “I’m glad it turned out to be a nice… oops move aside, here come the kids.”