Learning all about police through the Citizens Police Academy 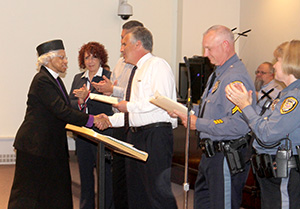 By Neil Schulman
Long Branch — “The cop shows on TV and the Hollywood movies are a dim reflection of what officer life is like,” said Anthony Cinardo, chaplain at Monmouth Medical Center.
He knows because he just spent eight weeks learning what police life is really like, as part of the Long Branch second Citizens Police Academy class.

Officers Joseph Graziano and Kim Leavy conducted their first Long Branch Citizens Police Academy in October of last year. Graziano said it was conducted “so residents of Long Branch can learn more about what the Long Branch Police Department has to offer, and how it operates.”

The first class had 14 graduates. In April, a second class, twice as large, was begun. After meeting two hours each Thursday for eight weeks, the 28 learned details of what the police do for the city.

Each week, attendees learned of the different aspects of what officers did – and how they worked with others in the city.

Leavy and Graziano weren’t the only ones who were giving lessons. Numerous members of the Department, including Public Safety Director Jason Roebuck, also spoke with the class. As did several others from the city, including Mayor Adam Schneider, Council members Joy Bastelli and Michael Sirianni, Stan Dziuba of the Long Branch Office of Emergency Management, Long Branch Fire Dept. Capt. Tim Somers and Lt. Jay Smuro.

The group saw some of the activities police do, including conducting traffic stops, and learned about many other facets of the department.

Cinardo, who was asked to give a speech on what they had learned. He said that one of the most important lessons was to look past the portrayals of police on TV, often dramatized or news segments depicting officers in a disparaging light by “very selective news quotes.”

“Police officers are everyday people too,” Cinardo said. “Men and women with feelings, compassion and genuine concern for the people you serve and protect.”
While the class was designed for Long Branch residents, police made an exception for Cinardo, given how closely he works in Long Branch. He said the hour commute was worth it.
“I only wish my home community would put together a similar program.… Maybe we could change our world one community at a time. 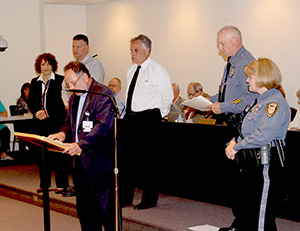 Anthony Cinardo speaks about what he learned during his eight weeks in the Citizens Police Academy. Shown are Joy Bastelli, Jason Roebuck, Mayor Adam Schneider, Joseph Graziano and Kim Leavy.