18th Annual Art in the Park held in West End 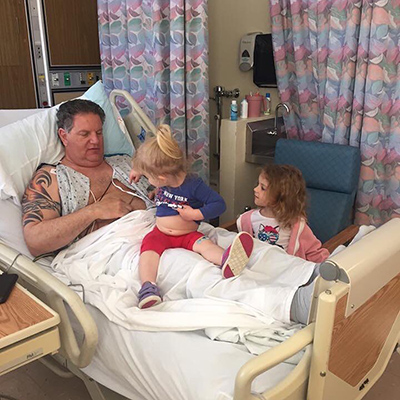 Walter O'Neill with his granddaughters Kennedy and Charlotte

Walter O'Neill with his granddaughters Kennedy and Charlotte

April 23, I was in a store in Neptune with my wife, when I turned to her and said it was awfully hot. Patty looked at me and said she thought it was fine. Normally that wouldn’t mean much to me as our body temperatures are usually at opposite ends.

As we left the store I was having problems taking a deep breath, but didn’t think much of it. We drove from Neptune home to Oceanport where I dropped off Patty, then went to Red Bank to another store.

While I was in the Red Bank store, I felt a pain in my chest that first started off feeling as someone was poking me repeatedly. That pain quickly turned into a burning feeling, I was really having problems catching my breath, and my vision started to blur. I left the store and drove back home.

When I arrived at my house the feeling was as if I had heartburn, but the sweating increased and the breathing became more labored. I went out on my deck to try and catch my breath and my daughter, Rachel told me I didn’t look good.

I knew that I didn’t have time for the squad to arrive, as it was 2:30 on a Saturday afternoon. One of my granddaughters was taking a nap, and to be honest I didn’t want to die in front of my daughter or at my house. So I made a decision that was not popular with many, but I drove myself to Monmouth Medical Center.

Rachel called me on my cell phone to make sure I was okay on my way to the hospital. It seemed as if someone was watching over me as I didn’t catch any red lights and a parking space was open right in front of the Emergency Room doors.

As I walked into the ER, the pain was very intense and I could hardly speak. The registration desk had about 10 people waiting in line. The employee looked at me and asked if I was ok. I was holding my chest and uttered the words heart attack and sat down.

Immediately someone came out with a wheelchair and took me into the back. I heard the girl at the desk say we don’t know who he is. In my hand I had my driver’s license and medical card and held them up. Before I was even in the exam room they had EKG wires attached to my chest. As soon as I stood up they tossed me on a bed.

The only way I can describe what occurred next is if you ever watched an Indy or NASCAR race. As the car pulls into the pit stop the crews descend on the car from all angles and everyone has a specific job. That is what happened to me. Out of nowhere the room was quickly filled with medical professionals doing what they do best, saving a life.

I had two intravenous lines in each arm, people were removing my clothing, taking blood pressure and administering drugs. Everyone was rushing, but they were extremely polite and telling me what was going on.

Dr. Catherine Hanlon, the emergency room doctor, told me that I was having a heart attack. She told me to try and relax and gave me aspirin. After a few minutes the pain started to become even more extreme. Over the next few minutes nitroglycerin was given to me three times. I told Dr. Hanlon that it was not working, and she said that a surgery team was getting assembled.

My wife was now at my side and at this point talking was nearly impossible, but the pain was so intense that I was crying. It felt as if an elephant was sitting on my chest and a burning knife in my heart.

Fifteen minutes after I checked into the emergency room I was being taken into the operating room. Dr. Jason Litsky of Monmouth Cardiology was the surgeon who would save me from a certain death. They determined that I was having what is known as the “Widowmaker” heart attack, where one of the three main arteries is totally blocked.

While I was on the operating table I watched on a monitor as Dr. Litsky inserted a device in my right wrist and proceeded up my arm, across my shoulder into my chest and right to the blockage. My artery was blocked 100 percent, and as the doctor was removing the blockage I thought I was going to die on the table. I told him thank you for trying to save my life and to tell my family that I loved them.

“Shut up, you talk too much,” said Litsky. “You will feel better in a minute, trust me.”

On the computer screen I watched as the blockage was removed, and then the artery started to close. That is when Dr. Litsky inserted a small mesh tube called a stent which is used to open and strengthen a weak artery. As soon as it was in place I could breath and watched  my heart come back to life.

I spent the next three days in the ICU at Monmouth Medical Center where the staff taught me about heart attacks and the medicines that I would be taking. I also discovered that 80 percent of heart disease is genetic and 20 percent is life style.

My eating habits up to the heart attack where horrible. I loved beef, bacon and fried foods. I hated vegetables and fish, and I had put my working out days behind me. Cigars on a weekend and sitting is what I enjoyed. That is the 20 percent I have control over, and now that I have a second chance it has changed.

The week before the attack I had warning signs but didn’t realize it. At work I would fall asleep. I told my wife that I must be getting old as that never happened before. I also had muscle pains in my chest and shoulder and just as though I pulled something. But as the doctor said, the oxygen-rich blood that my heart needed was getting cut off and without oxygen the heart muscle dies.

Dr. Halon said she and Dr. Litsky didn’t save my life. She said that because I knew something was wrong and that I realized the signs and symptoms of a heart attack, I saved my own life. The heart attack occurred two weeks before my 57th birthday and I was told only a small percentage of men my age survive a heart attack.

Now I’m taking cardio therapy at Monmouth Medical Center three days a week and will continue doing so for three months. The staff is wonderful as they help me rebuild my heart.

My mother asked me if I prayed while having the heart attack, and the answer was no. I knew that I had a short amount of time, and all I thought about was my two granddaughters,Charlotte and Kennedy. Missing them grow up is what crossed my mind. I love my family, I have watched my children grow into adults, but missing the girls brought me to tears.

Now, I’m 57 and given a second chance at life. My wife has been very supportive and makes sure I eat healthy and exercise so I can watch the girls grow up.

One thing that I’d never experienced before is fear. As a retired police officer, SWAT team, volunteer firefighter, and a karate fighter, I was never scared. I knew I could trust my training. But having a near death heart attack, is something I didn’t have control over, and knowing my heart is not as strong as me, is very scary.

So the moral of this story, know the signs of a heart attack, know what to do and what not to do. Take care of yourself. I know what was right and wrong, but I was lazy thinking it would never happen to me. Don’t make that mistake.