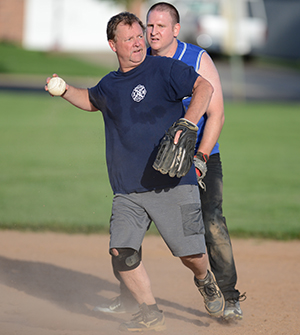 Ex-Fire Chief Tom Crochet of the Oceanport Hook and Ladder was the losing pitcher in the 2nd Annual Battle of the First Responders last week.

By Walter J. O’Neill, Jr
On July 11, the Oceanport Police Department received redemption over the combined fire departments of Oceanport in the 2nd Annual Battle of the First Responders, a softball game played at Blackberry Bay Park.
The 2016 battle of the guns and hoses was a chance for the cops to avenge the loss of last year. However, when asked what the score was last year the firemen said they won by a bunch of runs, and the cops said they lost by two. So from the opening pitch, there was a lot of banter back and forth.

Firemen were saying the cops had brought in ringers, as Mayor Jay Coffey and resident Tom Tvrdik were playing for the boys in blue. And police were saying how the Oceanport Hook and Ladder teamed up with the Port-Au-Peck Chemical Hose Company and had a few players from outside fire companies.

With all the joking and teasing, the game itself was enjoyable to watch. It was scheduled for seven innings but everyone was having so much fun it was decided to extend the game two additional innings. When the last pitch crossed the plate the Cops had won the game 24-11 and are now 1-1 with the fireman.

The game was played just outside the Oceanport Community Pool, and it was nice to see residents coming out to watch and cheer on the teams. During these trying times for first responders, the game was a great way to relax and have some fun.

The Oceanport Hook and Ladder combined with the Port-Au-Peck Chemical Hose Company to play softball against the Oceanport Police Officers, who won 24-11.

Taking a great stop and thrown from short is Oceanport Police Officer Gregory A. Lauretta, Jr., during the 2nd Annual Battle of the First Responders.

Oceanport Police Detective Sergeant Michael Fagliarone keeps his eyes on the ball as the PD beat the Fire Department 24-11.

Ex-Fire Chief Tom Crochet of the Oceanport Hook and Ladder was the losing pitcher in the 2nd Annual Battle of the First Responders last week.