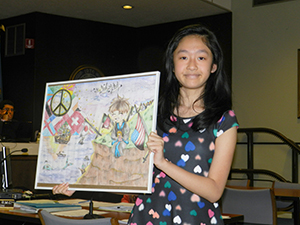 Mindy Nguyen, with an award-winning entry into the Lions Club Annual Peace Poster contest. Not only did she win the Eatontown Lions’ competition, but came in third in New Jersey, among thousands of entries.

Mindy Nguyen, with an award-winning entry into the Lions Club Annual Peace Poster contest. Not only did she win the Eatontown Lions’ competition, but came in third in New Jersey, among thousands of entries.

“They look like they are addressing a lot of the issues that were brought up,” Connelly said. “Hopefully we’ll have a better understanding and know where we stand by our next {council} meeting.”

He wouldn’t get into specifics. But the meeting is a hopeful sign that continues to repair the breech that occurred earlier this year, when the Kushner Companies dramatically walked out of a council meeting before the governing body was poised to vote down an ordinance that would have changed the zoning in the area to allow for Kushner’s plans.

In a statement made afterwards on his Facebook page, Connelly seemed pleased. “I am optimistic that we will formulate a plan that will create a successful project for our town. I am thankful for all the input from residents, business professionals and our borough professionals to help guide us as a council to make these decisions for our town’s future”.

A proposal for the Zoning Board to look into the issue was voted down.

Mayor Connelly was never enthused about the idea. Addressing a homeowner who does have chickens but will now apparently have to get rid of them, he said, “When you purchase your home, you have to look at the existing ordinances and you’re going to have to abide by them.” 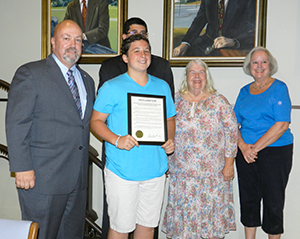 In addition to normal council business, Eatontown recognized a couple of talented youths from Memorial School at the July 13 Borough Council meeting. Above, Eric Piez receives a plaque congratulating him on winning the first “What Eatontown Means to Me” essay contest in many years. Mayor Dennis Connelly (left) was actually one of the winners of the old contest.

On another topic, it seems Eatontown residents won’t be able to keep chickens on their properties. The proposed ordinance to allow the birds apparently does not have enough support on Council to get out of the talking stage. Councilman Anthony Talerico had broached the council on the subject over several meetings, intending to craft an ordinance tailored to Eatontown but based on the rules from several towns such as Roxbury and Red Bank.
In a separate matter involving cats, the Council will adopt a resolution in support of the Trap, Neuter and Release (TNR) program at their next meeting, July 27. A previous try at beginning the program went nowhere because, as Councilman

Kevin Gonzalez put it, there was no “point man” to facilitate it.

TNR is a program in which free-roaming cats are humanely trapped, sterilized, and, after finding no other medical problems, returned back to the outdoors from where they came.

Brian Charn, the president of the Eatontown Board of Health, told the council he has received a memorandum of understanding from the Monmouth County SPCA head Ross Licitra to begin the program, which is based on what Charn called a “highly successful” Highlands borough TNR ordinance.

This all comes at a price. The cost of treating each cat is $75. However, half that cost will be split with SPCA, so the final total per cat would be $37.50. It’s expected that up to 100 cats per year would be treated in the borough, so the final cost is expected to be $3,750 annually.

Connelly seemed enthusiastic. “We’re talking about $3,700 and I don’t see any reason why we wouldn’t want to move forward.” he said.

Charn said that there will be training programs at the community center for borough residents who wish to volunteer with the program.

And last but not least, the borough is moving forward on a study on how to better utilize the existing space in Borough Hall. Overcrowding and lack of space have been an issue in the building for several years. There have even been past discussions about building a new facility somewhere else.

That last point was long ruled out as being too expensive and is no longer under consideration. But the Council voted to give $14,500 to the borough architect so that they may begin a preliminary study into the subject.