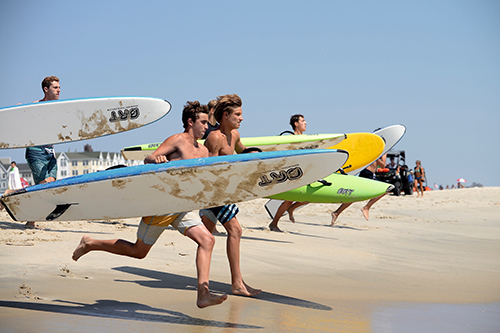 There were ten teams and 300 participants competing. In addition to the three local units, squads from Avon, Sea Girt, Spring Lake, Ocean Grove, Bradley, Belmar, Manasquan, and Allenhurst were in the surf.   The competition is segregated into three divisions by age, Group A (14-15), Group B (12-13) and Group C (9-11).  There was no team scoring for this tournament.

Sammy Rennard led the Long Branch boys in Group A with four first-place finishes. Rennard topped the field in the Distance Swim and the Run-Swim-Run.  He also teamed with Mckenna Johnson to win the Rescue Race.  Rennard finished the day winning the Iron Guard with teammate Ryan Forbeck placing third.

Claudia Kelly demonstrated her stamina winning the Distance Run with fellow LB guards Bella Santamaria and Rachel Warner placing second and third. Claudia also led a LB three-place sweep in the Iron Guard, getting the win just ahead of Jocelyn Cullen and Santamaria.

Kelly placed second in the Run -Swim-Run.  Here she was beaten only by teammate Emily Honnold.  Honnold spearheaded a six-way Long Branch sweep in this event. Following Honnold and Kelly across the line were Jocelyn Cullen, Mary Mahoney, Victoria Ireland and Cameron Oneidas.

Long Branch’s Kevin Truscio led boys Group B with four victories. Teammate Theo Rennard was often his closest rival.  The pair went 1-2 in both the Run-Swim- Run and the Distance Swim.  Rennard also finished third to Truscio when he claimed victory in the Iron Guard. Truscio then partnered with Theo Rennard as an unbeatable combination to win the Rescue Race.

It was the same story in the Paddle with LB replicating the same exact sweep, this time led by Mairead Kelly. Joining Kelly in the celebration here were Molly Applegate, Ellie Sanville, Sam Josselyn and Julia Nappi.

Long Branch’s Molly Applegate led a 1-2 -3 sweep of the Group B Iron Guard.  Coming across behind Applegate were Sam Josselyn and Julia Nappi. Grace Turman of LB just edged out Monmouth Beach’s Nia Valente for the victory in the Beach Flags event.

In the boys Group C competition Long Branch had their best outing in the Distance Run where a 2-3-4 finish was submitted by Colm Murrer James Cogvata and Brody Fahys.  Monmouth Beach’s Sasha Diese took fifth place.

LB junior lifeguard instructor and Group B coach stated of the program, “Junior lifeguarding is a chance for kids of all ages to develop a love and appreciation for the ocean.  As instructors we teach kids how to use ocean lifesaving equipment while also teaching them CPR and what it means to be on a team.  Here in Long Branch we are fortunate to have the city dedicated to supporting the program and a strong advocate in the person of our supervisor Dan George,”concluded Elliott.

Shayne McGlauglin of Monmouth Beach taking second in the Group B Paddle.