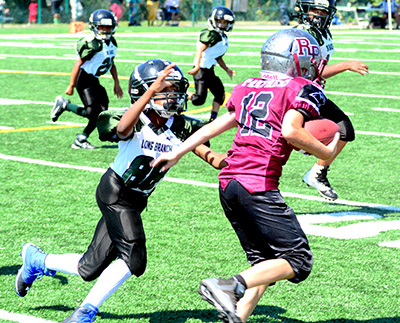 By Skip Pierce
Long Branch relied on the big play and solid defense to dominate the Roselle Park Panthers by a 32 – 6 score to win the season opener in American Youth Football Cadet level action.  Touchdown runs of 52 and 27 yards by Tyler Taylor and a 63 yard scoring jaunt by Chris Moses were the key offensive plays of the contest.

There were serious doubts concerning a Wave win early in the game.  The first LB drive stalled at the Panther 25 yard line.  On the ensuing series Roselle Park appeared to be halted when Wave defensive tackle Myian Bishop broke through to sack QB Terrance Hanratty and set up a four and long.  However, on the next play Hanratty bootlegged right and scampered 57 yards into the end zone.  The 6 – 0 Panther lead would ultimately be their final advantage of the afternoon.

The following LB series started at their 30 yard line.  On the third snap of the set running back Chris Moses popped through the line on a block by Juíelz Lee and raced 63 yards untouched for the first Wave score.  Moses also went over for the extra point to establish a 7 – 6 lead and the Branchers never looked back.

Myian Bishop set up the next tally when he recovered a fumble at the Roselle Park 27 yard line.  On the very first play fullback Aulander Daniels gave up his body to execute a crushing block and launched running back Tyler Taylor who rambled 27 yards for the second Wave score and a 13 – 6 lead that held up to halftime.

The second half began with the Panthers getting good field position with a kick return to the LB 43. However, linebacker Chris Moses dropped the Roselle Park ball carrier for a loss on fourth down and the Wave took over on downs near midfield.  On the third snap of the next series it was Taylor again, this time going 52 yards to the uprights, on another block by Daniels with 19 – 6 now showing on the board.

The following LB score came when Havier Gonzalez high stepped his way 5 yards to the corner untouched.  This was preceded by an 18 yard tackle breaking run by Moses.

Late in the game a 37 yard keeper off a broken play by Wave QB Nick Miller was called back for an illegal block.  LB responded on the next play when running back Juíelz Lee spun out of three tackles to go 23 yards to the Panther 22 yard line.  The final tally of the afternoon came on the next snap with blocking back Aulander Daniels again doing his job, this time getting running back KaiíRee Laws through the line.  The Panther inside linebacker attempted a shoestring tackle but Laws literally hurdled the defender and raced 22 yards to the end zone.

Defensive tackle Myian Bishop was the dominate force on defense racking up 12 tackles with 3 for a loss.  Linebackers Aulander Daniels and Chris Moses were also instrumental in shutting down the Panther offense.