Will Devils pull of a repeat? 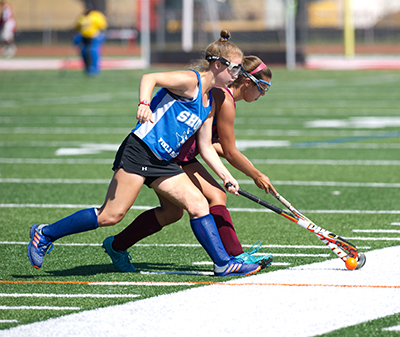 During a recent preseason scrimmage Amanda Halper of Shore Regional fights for the ball.

For the past 45 years in a row the field hockey team at Shore Regional High School has won their Shore Conference divisional title. That is a record many can’t comprehend or imagine and yet the team is poised to keep breaking records and notch number 46 this season.

Last year the Blue Devils finished 22-5 and had an explosive offensive unit with a two time All-American scorer and a goalkeeper that also earned All-American honors. However, this year the squad lost five key players to graduation, but head coach

During a recent preseason scrimmage Amanda Halper of Shore Regional fights for the ball.

One of the aggressive attackers for the Blue Devils this season is Kelsey O’Neill, a senior who has given a verbal commitment to play college hockey at Fairfield University.

has tremendous depth in her program.

“Coming off three consecutive NJSIAA Group 1 state championship seasons, the girls will look to continue to compete at a high level of play,” said Koenig. That depth will come into play in 2016 according to the coach. “Experienced players like Kelsey O’Neill, Kaitlyn Hunter, Abby Kopec, Maggie Lamb and the LaMorte sisters will continue to push the tempo of play.”

In front of Santi will be a defensive unit with Hunter, Nicole LaMorte, Jaclyn Shapiro, Lamb and Kopec. “We will strive to be one of the strongest proactive defensive units in the state and play a balanced attacking game with ball movement,” added Koenig.

According to Koenig the start of every new season is always exciting for the team and staff. “There may be new faces or different line ups to figure out each year, but the energy, work ethic and traditions are something that remains constant. I attribute this to the upperclassmen each year that set the tone and standard for the team,” said Koenig.

Over the summer Koenig and her staff put the Blue Devils through an intense training building on their endurance to be physically prepared for the season right from the first game. “This year we are focused on playing a balanced, elevated passing game and creating depth on all lines of the field, from our forwards to our defensive end. Each player understands they are an important piece in our overall success,” Koenig said.