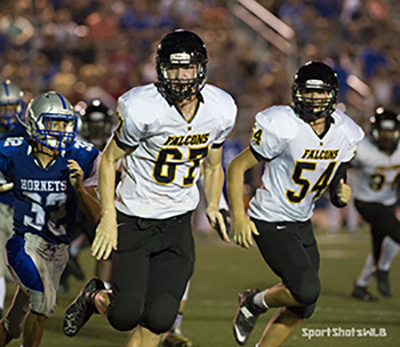 SportShotsWLB Looking to make a tackle for Monmouth Regional are Tyler Rebmann (67) a senior and Robert Schumacher (54) a junior in the game against the Hornets of Holmdel.

By Walter J. O’Neill, Jr
What a difference a week makes. Last week the Falcons of Monmouth Regional kicked off the

SportShotsWLB Monmouth Regional sophomore Dayshawn Porter (19) ran for a touchdown in the 28-2 win over Holmdel.

with a 42-7 loss in Ocean Township. Everyone looking at that game was saying it was going to be a long season for the Falcons.

However, that bad performance is now in the past and all forgotten as Monmouth Regional traveled to Holmdel this past Friday and thumped the Hornets 28-2.

Monmouth Regional suffered a devastating loss before the season even started. Casey Pachucki, senior quarterback, hurt his knee and will be out for the entire season. Jay Eustace, senior, filled in last week at quarterback, the first time he played that position in a game.

Well, Eustace learned a big lesson last week in the loss to Ocean, as this week in Holmdel, he looked impressive. He completed six of ten passes for 96 yards and threw for one touchdown. He also ran the ball eight times for an additional 47 yards and one touchdown.

In the loss to Ocean, the Falcons were having difficulty running the ball. Rich Mosca, head coach, along with his offensive coordinator Dan Wendel made perfect adjustments for the Holmdel game. Monmouth Regional rushed for three touchdowns. Dayshawn Porter, sophomore, had four carries gaining 86 yards and one touchdown. Booker Jayhahn, senior, also had a touchdown run.

The touchdown catch for the Falcons had Elijah Walker, senior, catching the ball. He had three receptions for 74 yards. Jayhahn had one catch for five yards, Eli Rife, sophomore had one three yard catch and Mark Cirlincione caught one ball gaining 14 yards.

The Falcons travel to Metuchen on Friday night, September 16, for a non-conference game with a 7:00 p.m. kickoff.