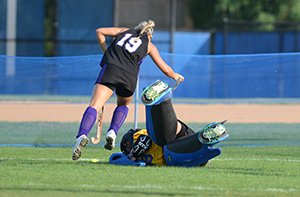 By Walter J. O’Neill, Jr
For the past four years the top two field hockey teams in the Shore Conference have been the Blue Devils of Shore Regional and the

“This is the third year we have played Rumson early in the season, the past two have been our season openers,” said Kelly Koenig, head coach of Shore. The two schools have become rivals in every sport, and field hockey is very intense.

Shore had nearly two decades of winning the Shore Conference Title; however the Bulldogs have beaten the Devils two consecutive years for the title. For the 2016 season RFH has a tremendous amount of depth and nearly a dozen players returning with varsity experience.

Receiving the top ranking this year in the Shore Conference was Rumson-Fair Haven with Shore Regional getting the two spot.

Years past games were controlled by the offensive powers on the field, this year it was obvious that defense is the dominating factor.

“The team always know that it’s going to be a tough, fast-paced, competitive match, where we will need to capitalize on goal-scoring opportunities when they are presented. Being disciplined, having a focused intensity and looking to execute under pressure is the key in these types of games,” said Koenig.

Rumson-Fair Haven took advantage of the scoring opportunities during the first half. The only goal scored was by junior midfielder Lily Croddick after getting a pass from fellow junior Makenna Maguire on a penalty corner. That goal occurred with 3:39 left to play in the first half.

“During the first half, the girls worked to force the foul, take the free hits quickly, and move the balls on angles to create space. Unfortunately, we struggled to convert on our eleven corners,” said Koenig.

In the second half, RFH had another goal off a corner. Maguire inserted the ball, but it was passed around and came back to her and she nailed the shot with 22:20 left to play. That was all the Bulldogs needed as they beat the Devils on their home grass.

“During the second half, we deviated at times from our game plan and struggled to settle into the tempo of the game. Our defensive decision making in transition wasn’t solid for a complete 30 minutes and that led to Rumson taking advantage of our mistakes,” added Koenig. She also said that having senior captains like Kelsey O’Neill and Molly Santi step up under pressure serves as an example to the younger players. “We had to adjust Kelsey’s position, and I was happy with her ability to immediately adjust and create opportunities for us on attack. Molly is our new starting goal keeper, but is not new to field hockey.”

Santi made 18 saves in the loss. “We put her in quite a few compromised situations with our decision making and many times, Molly was able to work herself out of those situations,” Koenig said.