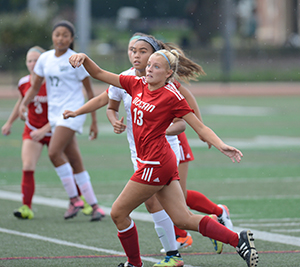 Jessica Wegelin enters her fourth year as the Green Wave head coach. This year she is excited about the group of girls who will be representing Long Branch. Wegelin is a preschool teacher for the district and over the past few years has developed off season programs for the players. One of the biggest accomplishments is a soccer camp for preschoolers.

Over the last decade girls soccer in Long Branch has been on the decline as participation goes; Wegelin is not only thinking of improving her squad this year but also developing future talent. Last season the Wave finished 4-14, and this year she has a team that is unified in their desire to win and be competitive.

. Last year his team finished 11-10 and returns many skilled players for the 2016 season.

Ocean scored two goals in each half. Lia Rice, sophomore, scored two of the teams’ four goals. Junior Mariabella Ferraina scored one goal and Sadie Stout, freshman, had the other goal.

Four Spartans each assisted on those goals. Sophomore Morgan Barlett, senior Amanda D’Auria,  Sydni Greaves and Sydney Maxwell, both juniors, had the assists. In the goal for Ocean was Ava Hiers, junior, who made three saves.

Wegelin was disappointed in the outcome, but knows that her team is improving with each game and every practice. She said as a coach  is all she can hope for is improvement.