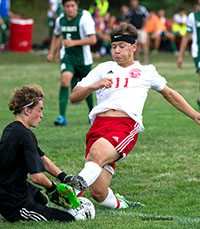 By Walter J. O’Neill, Jr
Ronald Regan was President; the top movie was Ghostbusters and Indiana Jones the Temple of Doom. The most popular TV show was Magnum, P.I. and a new Dodge Ram pickup cost $8,995.00. That was 1984; it was also the first time Tom Reilly became a head soccer coach at Ocean Township High School.

Fast forward 32 years and the 2016 soccer season opened and Reilly along with his Spartans hosted the cof Long Branch on September 9.

During the first half of action the Spartans scored five unanswered goals on the Green Wave.

Erick Vasquez, sophomore forward for Ocean, scored two of those goals. Two other sophomores also scored goals for the Spartans;

and James Schutz. Cosimo Franze, senior midfielder, also scored a goal.  Franze and Harding each gad assists in the victory.

Adrian Castro enters his fifth season as the head coach of the Green Wave. After being shut down in the first half against the Spartans the Wave did find the net in the second half of play. Joao Victor Pessoa, senior, kicked in the only Long Branch goal.

Thomas Gleason and Max Winters each had four saves in the goal for their respective teams. It was an important and impressive start for the Spartans as both schools play in the very competitive Shore Conference B North division.