O’port: Who’s crying over spilled milk on the casinos? 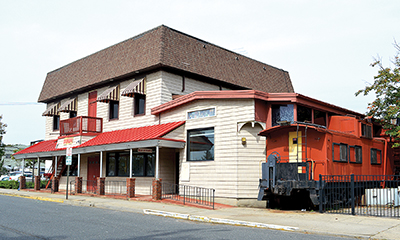 By Neil Schulman
Long Branch — Two projects in the Transit Village zone have received informal reviews by the Long Branch Planning Board. One to build on the old Casey Jones property received praise, but a proposal to build 87 units of housing a few blocks away met with lukewarm reactions.
At its Tuesday meeting, the board also scheduled a special hearing to listen to the proposal to construct a synagogue in West End. That’s expected to prove controversial.

At the informal portion of the Board meeting, developers for the former Casey Jones property outlined their proposal for a mixed use, a multi-story structure with retail on the first floor and residential units above it.

The property, across from the train station on the corner of Morris Avenue, used to house the train-themed Casey Jones restaurant.

The developers envision a few thousand square feet of retail on the first floor, and 36 units of housing above it. The units would come with balconies, with most fo them facing the ocean, visible from the third floor.

Parking would be partially under the building.

This area is considered a Transit Village zone, with special zoning rules designed to enhance the fact it’s so close to the train station. Developers are encouraged to propose ways to enhance the area for the public, and the community room on the third floor may be opened to public organizations, not just residents.

Because of the size of the lot, a few variances would be required. It’s slightly undersized, and three of the sides have either streets or a right-of-way, cutting off the ability to expand it.

But Board members said they approved of the ideas, and the conceptual drawings they saw.

“It’s reminiscent of some of the places in Pier Village,” one member said.

A hearing on the Menachim Learning Institute, the proposed new synagogue in West End on Ocean Avenue, has been postponed to a special hearing on Wednesday, October 5.

The hearing was originally scheduled for Sept. 20, but there was an issue with the notifications that were sent out, requiring that it be rescheduled.

The proposal calls for a synagogue  the second story of and Ocean Avenue building, with commercial space on the first floor. It would be built where the old movie theater and adjacent buildings are.

Several years ago, Chabad of the Shore, the owners of the property, proposed building a synagogue there with a different layout. It was rejected by the city’s Zoning Board of Adjustment, because houses of worship were not legal uses in that area at the time.

One of the major reasons people objected was due to the fact that the parking lot behind the theater, which has become a default parking spot for many visiting West End where parking is scarce, would become part of the synagogue.

Since then, the city has created the West End District Overlay, which would permit a house of worship on the second floor, and implemented requirements about maintaining parking spaces.

However, many people still object to the proposed structure. They say Chabad had been holding services for years before ever seeking permission to build a synagogue, and still have concerns about the impact on parking.

Not happy with Willow Ave.

Developers of a lot on Morris and Willow Avenue say they’ve scaled back their initial proposal, and changed the aesthetics in an effort to make the city happier, but the board still sounds skeptical about the proposal.

The Diocese of Trenton wants to build on the former St. John the Baptist property. A couple of years ago, they received preliminary approval to build 104 units on a five story structure.

While that’s permitted under the Transit Village zone, city officials approached the developers and said that they had concerns with the project as being too dense for an area that was filled with single-family homes. They also had concerns about the proposed aesthetics.

On Tuesday, developers came back with an informal proposal that changed the look, and cut 17 units, bringing the number down to 87, and reducing the height to four stories.
They also changed the appearance of the buildings, which board members had said originally looked too “flat.”

But board members didn’t sound enthused by the new drawings, saying they still appeared flat and visually uninteresting. Developers said that may have been due to the colors used in the sketches, making parts appear to pop less than they did.

The real issue, said several members, including Chairman Edward Thomas, is that although the property is technically in a Transit Village zone, there’s a large wall blocking people from walking to the train station. Since nobody is going to be walking to the train as their main form of transportation, it defeats the purpose of the zoning.

Carl Turner, Assistant Planning Director for Long Branch, said that the design was a work in progress, and the developers had been coming to seek input before designing plans for final approval.