Shore football gets its mojo back

Free event to help those with psoriatic arthritis 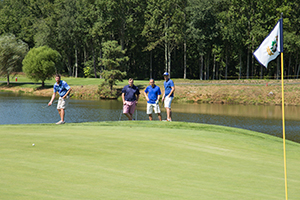 A record number of golfers and community sponsors came together in support of local students at the Brookdale Community College Foundation’s 37th annual Education Open, held Sept. 15 at Eagle Oaks Golf and Country Club in Farmingdale.

The tournament raised $68,407 for Brookdale scholarships and student services, the largest amount ever collected since the tournament was established in 1979.

“We could not be more grateful to the nearly 200 community members, local businesses and volunteers who helped make this our most successful Education Open in history,” said Timothy Zeiss, executive director of the Brookdale Foundation and Alumni Affairs. “Their generosity will provide scholarships to hundreds of deserving local students who are attempting to build a better life for themselves and their families.”

The athletes were on hand to support their colleague and 2016 Education Open guest of honor Peter Grandich, who was recognized for his support of area athletes, business owners and nonprofit organizations, including the Foodbank of Monmouth and Ocean Counties and the Ashley Lauren Foundation.

Grandich, of Freehold, is president and CEO of Peter Grandich & Company and author of the autobiography “Confessions of a Wall Street Whiz Kid.”

All proceeds benefit the Brookdale Foundation’s “Building Minds, Building Futures” scholarship fund, which has provided more than $4.4 million in college scholarships to nearly 7,000 local students over the past 16 years.

The tournament was co-chaired by Domenick Servodio of TD Bank and Tina Munson of Lomurro, Munson, Comer, Brown & Schottland in Freehold. A team of current Brookdale students, each of whom have received a Foundation scholarship toward their education, volunteered to help run the tournament as well.

“The funds raised at this tournament will help provide more than $425,000 in scholarships this year to Brookdale students of all abilities, backgrounds and ages,” said Munson, during the awards dinner.

“These students are from local, middle-class families who don’t receive financial aid and grants, and who are determined to succeed and achieve their dream of earning a college degree. We really, really thank you for your support, and I know the students thank you tremendously as well.”

A team of golfers participates in the 37th annual Education Open Golf Outing.