Shore football gets its mojo back 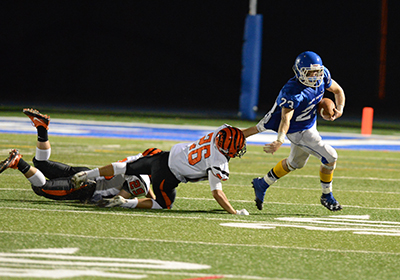 One week after the Blue Devils of Shore Regional suffered a loss in Asbury Park to start the 2016 season, ending their Shore Conference 20-game winning streak, they crushed the Bengals of Barnegat 34-14.

“I was totally surprised by the poor performance of our team in that loss to Asbury Park,” said Mark Costantino, head coach of the Blue Devils. This is the start of his “silver season” as he enters his 25th year as head coach with a career record of 166-86-1, and two back-to-back state titles. “I’m not taking anything away from Asbury Park, they were well coached and played a good game. I just know that our players did not put in their best effort that night. We had a very good week of practice and attitude adjustments.”

Costantino said that he lost 18 starters from last season to graduation, and for a small school like Shore that is normally a kiss of death to a program. “I know that our kids are much better than they demonstrated in Asbury Park and they proved it in game two against Barnegat. We still have some areas to work on, but we will only improve from this point forward,” added Costantino.

Shore won the toss on Friday night in West Long Branch and differed to the Bengals. Last season, which the Blue Devils went undefeated, they had one of the state’s best overall defensive units. “That is our style of football. We play physical and our opponents know we are going to hit,” Costantino said. And they stopped Barnegat clock on their first offensive series.