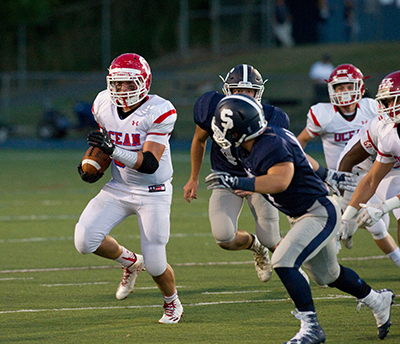 One week after the Spartan football suffered a heartbreaking loss to Wall Township High School they had to travel to Middletown South and face the top ranked team in the Shore Conference. Many football experts picked the Eagles to run and pass all over the Ocean Spartans.

Ocean scored first. It was a 52 yard pass from Kenney Pickett, senior quarterback, to Joey Aldarelli, senior wide receiver. Pickett made the extra point kick and the Spartans had a quick 7-0 lead on the heavy favorites.

In the second quarter Middletown South was able to kick a field goal and was down 7-3. Ocean then answered that score when they moved the ball all the way to the Middletown South one yard line. That is when Anthony Tedesco powered in for the touchdown. Pickett was good on the kick and Ocean was up 14-3.

However, the Eagles had two big pass plays that resulted in a 49 yard touchdown. The extra point kick on that score was no good. Then the final touchdown of the first half was a 43 yard pass play and extra point. Middletown South took a 17-14 lead into the halftime break.

Ocean started the second half on fire. They came out and scored on a 12 yard pass from Pickett to Aldarelli. Pickett then ran the ball in for two extra points. The Spartans were now up 22-14.

Just like in the first half the Eagles scored two third quarter touchdown on pass plays. The first was a 62 yard play and extra point kick. The other touchdown was a 17 yard pass and two point conversion. Going into the final quarter the Eagles had a 30-22 lead on the Spartans.

The final quarter of the game had only one touchdown. It was a 12 yard run and extra point by the Eagles who took the game 37-22. However, the game was much closer than the final score indicated.

Tedesco had 49-rushing yards for Ocean on 13 carries. Picket had nine yards on eight touches. In the air, Pickett was 16 of 26 for 220 yards, two touchdown and two interceptions. Aldarelli had five catches for 82 yards, Mike Krug had two receptions for 55 yards, Kam Thompson caught six balls 42 yards and Tedesco had 25 yards on one catch.

Next game for the Spartans will be at the Count Basie Field in Red Bank on September 23, when they face the Caseys of Red Bank Catholic. Both teams lost to Middletown South.